Recently, Apple Daily and Face Magazine reported that while Raymond Lam (林峯) was dating Mavis Pan (潘霜霜), he was also involved with an old friend from Xiamen, Angel Fong (芳芳).  The publications included photos of Angel posing with Raymond’s acting and music awards, thus leading to speculation regarding the pair’s level of intimacy. Through his lawyer, Raymond issued a statement strongly condemning the false reports of Apple Daily and Face Magazine, which troubled his family and friends. At the same time, the incident made Raymond depressed and scarred. As a last resort, Raymond took immediate legal action to protect himself and the people around him!

Currently filming Valiant Legend <忠烈楊家將> in Beijing, Raymond accepted a long-distance telephone interview and said, “There has been a lot of false and negative reports all along, in which I have I laughed them off. However, I can no longer tolerate the current rumors! Since the Mavis Pan incident, I promised to work hard, while the current tabloids made it appear as if I were lying! This surpassed my bottom line! Although the work is very strenuous, I will not leave the entertainment industry. Making my family worried is what makes me want to give up! ”

Raymond stated that the [Angel Fong] photos published in Face Magazine were from several years ago. The photos were taken during a house-warming party in which he invited his friends from Xiamen. Aside from the dog and awards photos, the remaining photos were not taken at his house. Since the photos were from several years ago, Raymond said sadly, “Ms. Lok (Virginia Lok) already told reporters that it was not true. However, they persisted to write the article in a contrary manner, which violates  the ethics of the reporter!”

Since Raymond was in the entertainment industry, he has never taken the radical action of issuing a legal letter.   Since the current tabloid reports made his family sad, he cannot accept the situation. Raymond has not contacted Angela Fong for several years. She was married and Raymond  worried that the reports will affect Angel’s family.

Raymond sadly noted that the untrue reports also injured him on a physical and mental level. Long-term depression led to reservations when meeting other people. Raymond said bitterly, “When I go to old classmates and friends’ gatherings, they are afraid to take photos with me. Even if they took the photos, they will deliberately ask whether they can place the photos online.  When fans ask to take photos with me, I would also hesitate. It is very difficult to possess this type of psychological burden!”

Below was the public statement issued by Raymond Lam’s lawyer:

Mr. Raymond Lam is very grateful to have the support and care of his company, colleagues, and fans. He again pledged to continue to work hard and focus on his  acting and music in order to thank everyone.

Jayne: Although Raymond noted that Angel Fong’s photos were taken several years ago at a housewarming party, I thought the awards featured in the photo were his TVB awards from 2010? In addition, Angel wore 3 different outfits in those photos, indicating she was there more than one time just for the house warming party.

This article does not address why Angel Fong taunted Mavis Pan on August 2011 that if Mavis saw where Angel was, she would regret loving that type of man (indicating Raymond Lam). 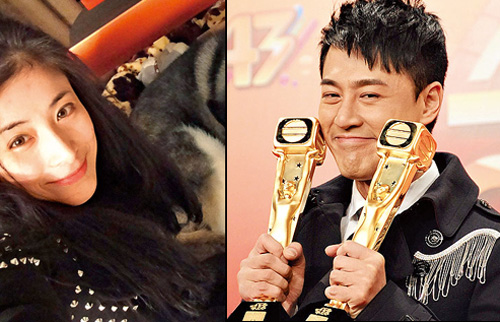