Raymond Lam is Not Tempted by Ankie Beilke 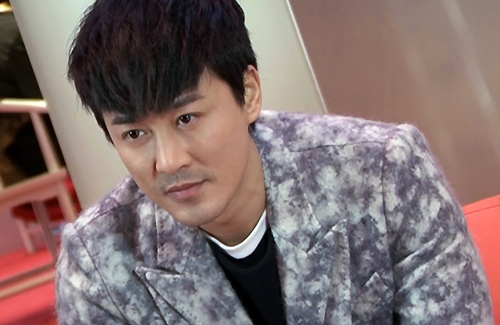 Ankie portrays a drug dealer and third wheel in Raymond and  Charmaine Sheh‘s (佘詩曼) relationship in Line Walker. In a recent filming session,  Ankie was dressed in a body-hugging deep V-neck dress, but Raymond hardly paid much attention to her. Once the cameras stopped rolling, the two did not interact with each other although Raymond and Ankie had worked on 2010’s Perfect Wedding <抱抱俏佳人> together.

While Ankie usually attracted romantic rumors with her co-stars, such as with Ruco Chan (陳展鵬) in Brother’s Keeper <巨輪>, she is confident that there will be no romance scandal between Raymond and herself. She said confidently, “As long as BB [Karena] is around, there won’t be any rumors about us!” Ankie also took the opportunity to clear her rumors with Ruco. She said, “Ruco and I are good friends. After filming, we had little contact.”

Ankie emphasized that her role has character depth and was not inserted to simply come between Raymond and Charmaine. Ankie explained, “The character is not as simple as it seems. She is a very complicated person. I only accepted this role after seeing how challenging it is.”

Portraying an undercover cop, Raymond said, “In the past, I looked at such roles and thought they were really challenging. Really wanted to try them. Finally, I have the chance. It was really fun. Furthermore, I got to work with Charmaine. After working together for so long, we share a lot of chemistry.”

With Raymond’s TVB management contract ending in April, it is unclear whether he will renew his working relationship with the station, sign with another agent, or even start up his own production company. When asked if this would be his last TVB drama, Raymond said, “I never gave it much thought. Let’s see after filming this one!”

23 comments to Raymond Lam is Not Tempted by Ankie Beilke