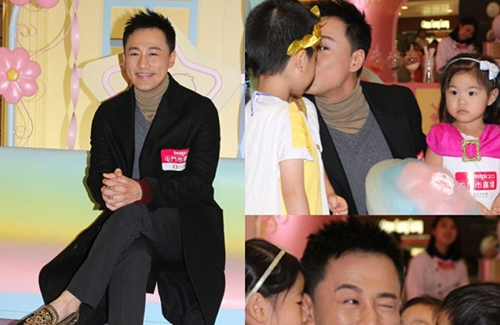 Charmaine Sheh (佘詩曼) revealed at the 2016 TVB Sales Presentation event that the movie version of Line Walker <使徒行者> will begin principal photography in December. At the same event, TVB also revealed that a serial drama sequel for Line Walker is in the works, and that it will be a co-production with Mainland China’s Penguin Pictures.

Raymond Lam (林峯), who starred in the original Line Walker, was not spotted in the sequel’s promotional poster. Attending an event a shopping mall yesterday, Raymond expressed that chances for joining the sequel are slim, and while he was approached to do the Line Walker movie, he turned it down.

“There has been talks to do a Line Walker movie since as early as a year ago,” said Raymond. “But I turned it down. It’s because those who like to watch the television drama would prefer to spend more time to watch the story unfold in every episode. In a movie, everything ends in two hours.”

As Raymond was absent in the poster for Line Walker 2, which brings back original cast members Charmaine Sheh, Michael Miu (苗僑偉), Benz Hui (許紹雄), Elena Kong (江美儀), and Sharon Chan (陳敏之), Raymond admitted that his chances for joining the sequel are slim as he has allotted time to focus on his music career until April of next year. Raymond, however, did reveal that he is currently in talks to appear in the movie version for A Step Into the Past <尋秦記>, the 2001 time-traveling drama that pushed Raymond to fame.

Raymond Wants To Have Twins

At the event, a boy and a girl, who are twins, presented Raymond with a gift. Raymond expressed that he hopes to also have a set of boy-girl twins in the future, exclaiming that it would lessen the mother’s burden. Asking if Raymond has thought about starting a family soon, he said, “In the next half year I will be focusing on music. Work comes first, so I haven’t thought about it yet.”

As Christmas is coming soon, will Raymond take a break to go on vacation with girlfriend Karena Ng (吳千語)? “I’ll be plugging the first single off my new album in December, and will be spending the entire month promoting my album. Karena will still be in Korea filming her movie.”

Although both will be too busy for a vacation, Raymond said he will fly to Korea to visit her on Christmas day. “Filming schedules are hard to adjust, but good thing I’ll be able to eat a meal with her that day.” What present will Raymond give her? “I rather not say it.”