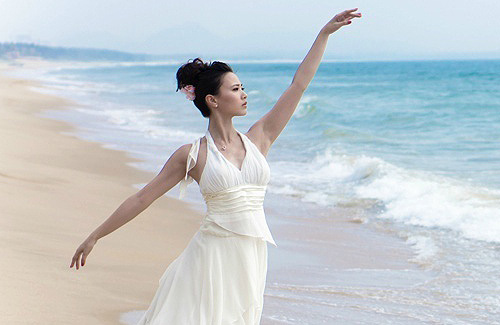 Since winning the crown for the 2011 Miss Hong Kong pageant, Rebecca Zhu’s (朱晨麗) resemblance to Fala Chen (陳法拉) allowed her to steadily increase her popularity. Within one year, Rebecca has taken part in three major productions, Silver Spoon, Sterling Shackles <名媛望族>, Triumph in the Skies 2 <衝上雲霄II>, and Always and Ever <情逆三世缘>. Although the audience members initially called her out on her weak acting abilities, the 25-year-old actress continues to improve and make a footprint in the industry.

Prior to competing in the pageant, Rebecca was a talented ballet dancer. She left her home in Suzhou and came to Hong Kong to study the arts as a teenager. While many may think that it is a shame for Rebecca to give up a career as a ballet dancer to become an actress, TVB actually gave the opportunity for Rebecca to shine in front of the screen by using her dancing abilities.

As a beauty queen, it is necessary to keep up with the image even after the competition. Rebecca voiced the difficulties in trying to do so and had to shed her pageant image in order to get into character when filming. “It took time to get used to the filming schedules in the entertainment industry. When I was a dancer, I had regular work hours. But I’m still young, so I can persevere. Although I have only filmed three dramas, I’ve learned a lot on the way thanks to the seniors I met.”

Rebecca is close friends with Elena Kong (江美儀), whom she had previously worked with in Silver Spoon, Sterling Shackles. In Triumph in the Skies 2, Rebecca plays Elena’s daughter, the strong-headed and spoiled, Pink Wu. In Always and Ever, Rebecca plays Bobby Au Yeung’s (歐陽震華) mother in the 1950s. In both cases, Rebecca praised Elena and Bobby for being friendly and comedic. Since Cantonese is not Rebecca’s mother tongue, she is currently working on her pronunciation with the help of others.

As an actress, Rebecca understands that rumors will be inevitable. She tries her best to overlook the speculations despite being previously linked to Mr. Hong Kong winner, Clayton Li (李晉強), and TVB’s residential bachelor, Kenneth Ma (馬國明). Rebecca said, “Currently, I’m focused on work. I will learn from Carina Lau (劉嘉玲), who is also a Suzhou native, to become an outstanding artist. Everyone said I look like Fala Chen (陳法拉), whom I regard as a target and hope to establish similar achievements.”