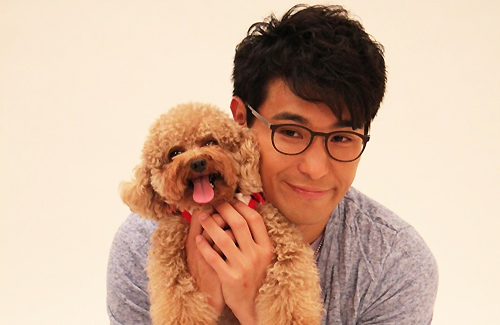 When Ruco Chan (陳展鵬) and Michael Tse (謝天華) went to Malaysia to promote for TVB in 2011, Ruco was still fresh from his The Other Truth <真相> fame. Throughout the promotional tour, the media described Michael Tse to be an elder brother taking care of his younger brother during the trip. Flash forward to 2013, and Ruco has now become the elder brother, bringing his younger sisters – Aimee Chan (陳茵媺), Elaine Yiu (姚子羚), and Vivien Yeo (楊秀惠) – to a promotional event in Malaysia for his leading drama, Outbound Love <單戀雙城>.

“No, not an elder brother,” said the humble Ruco with a smile. “But as a man, it makes sense to take care of the women!”

Malaysia was His Milestone

“Malaysia was my milestone,” said Ruco as he recalled the many tours he took in the country. “I won my first award here, and another last year. I also find it surprising at how welcoming Malaysian fans were, and how quickly they were able to accept me. I went on many promotional tours around Hong Kong, but I have never met fans that were as passionate as those in Malaysia. It’s incomparable.”

Ruco, who has just completed the shooting of television drama Outbound Love, a joint Hong Kong and Malaysian production, was asked if he had learned a few Malaysian phrases while filming the romantic drama in Malaysia. The 36-year-old said, “My role was that of a tour guide from Malaysia, so I did have to learn a few. I’ve learned them by pinyin. They’re interesting. This is probably wrong, but I think ‘mari-mari’ means ‘come here’? ‘Nanti-nanti’ means ‘wait a minute’, and ‘mati-mati’ means ‘oh no’?”

On his best memories of Malaysia, Ruco immediately said the food. “Vivien Yeo was our tour guide. After all, she was the only one who could speak Malaysian!”

“The last two years have been my busiest,” admitted Ruco. “I’ve been in this industry for 18 years, but I would definitely consider 2013 to be my harvest year.”

Ruco filmed a total of eight dramas since he shot to fame with The Other Truth in 2011. Out of the eight, five of them were planned for 2013 releases. So far, only Reality Check <心路GPS> and Slow Boat Home <情越海岸線> have managed to snag the earlier 2013 airtime slots.

“To be honest, I had a fear that the audience would grow tired of me. Five dramas in one year is really too much for anyone to handle, but then again, when considering how different each drama is to the other, my nerves calmed down. My character in each drama is very different, whether or not it is the character’s personality, history, or identity. I believe that I will be able to bring different sides of my acting to the audience.”

Ruco currently has three dramas that are waiting to be broadcast by TVB. Brother’s Keeper <巨輪>, an epic cross-millennial drama that also stars Louise Lee (李司棋), Edwin Siu (蕭正楠), and Linda Chung (鍾嘉欣), will be released sometime in the fourth quarter of 2013. Astro has plans to release Outbound Love in December 2013, and Ruse of Engagement <叛逃>, an action-packed crime drama costarring Ron Ng (吳卓羲), Eddie Kwan (關禮傑), and Yoyo Mung (蒙嘉慧), currently has no announced release date. However, the Amy Wong (王心慰) produced series, which was filmed in 2011, was presented at TVB’s 2013 Sales Presentation event last year.