Sharing many photos of blissful family life with his daughter “Little Piggy” (小豬比, Quinta Chan 陳諾瑤) on his social media, actor Ruco Chan (陳展鵬) is one happy family man. Yet, it did not always occur to the popular actor to prioritize family life.

Signing on to a music recording in 1997, Ruco’s entertainment career met with many hiccups before his steady ascent to Best Actor. On TVB program One From the Heart <霎時再感動>, he shared how family had been a fountain of support, and how his values changed after his mother encountered a health scare.

Mother Forks Out Money to Support Ruco
Recalling how he grew up in a humble family, Ruco had to start working hard on graduation to earn his own keep. “(I) really wish for my whole family to have better living circumstances, after going into entertainment I was constantly at rock bottom, I switched many companies and did not do well, but mom did not complain, when I started to have trouble with even my own expenses, mom took out her own savings to help,” In 2016, he won Best Actor with A Fist Within Four Walls <城寨英雄>, which brought more work opportunities and better remuneration, so he afforded to bring his family on vacations and enjoy life. As his parents entered their golden years, he also began to realize how having simple conversations were way more meaningful than luxuries like going on trips.

Making Up for Lost Time 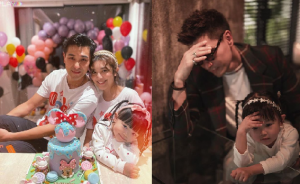 When he got tied the knot with Phoebe Sin (單文柔) in 2018, there was talk that Ruco was in a rush to get married so that the “happy” event could help with his mother’s recovery as she had been unwell since suffering a stroke; he allegedly also wanted to fulfil her wish of seeing him settle down and start a family. Ruco recounted how his mother’s condition had worsened rapidly and both Chinese and Western doctors could not figure out why. After her first seizure following a fall at home, she had to be injected with mood stabilizers to make her feel better. Turning down jobs at that time, Ruco concentrated on caring for her and continuously sought advice hoping to improve her condition. “Even if she had only five or ten years remaining, I wanted to make it up and spend more time with her,”

After years of struggle, Ruco’s mother has gotten better progressively; this has taught him how to appreciate those around him: “After that I had a change in my values and perspectives and grew to appreciate and empathize with those around me more. Although money and riches are important because you have (loved ones) to take care of, but the most important thing is to be spiritually rich, to be truthful with family members and having mutual love and respect for one another is what defines true wealth.”