There have been rumors claiming that Song Hye Kyo and Hyun Bin have reunited and are back together.

In July 2017, Song Hye Kyo infamously married her Descendants of the Sun co-star Song Joong Ki. Their fairytale romance didn’t stay perfect forever, and within two years, the couple filed for divorce. The Chinese media was the first to report the divorce, which Song Joong Ki later confirmed in June 2019.

Earlier this year, Korean gossip circles reported that Song Hye Kyo may have already reunited with actor Hyun Bin, her co-star in the 2008 Korean television drama Worlds Within. Song and Hyun dated in 2009, following their collaboration in Worlds Within. They separated in 2011. 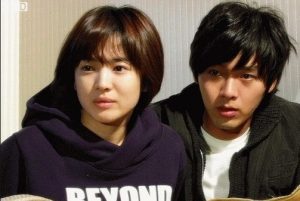 The netizen that first broke the news claimed that Song and Hyun had recently purchased a new home together near Seoul. Following this report, a Chinese netizen shared that a friend who lives in Seoul claimed that she saw Song and Hyun together one night, walking a dog. Song and Hyun’s possible reunion immediately trended on Weibo.

Instagram fan accounts of the Song and Hyun coupling shared a blurry photo of what appears to be the backs of Song and Hyun. Netizens commented that their body size and height difference resemble the rumored couple. The fan account also pointed out that Hyun’s stylist had recently shared an Instagram story of Hyun wearing the same outfit as the man in the blurry photo, but this story was quickly deleted.

Korean media has not officially reported on this rumor yet. Song and Hyun respective agencies have not released statements about the rumor.