“Ruse of Engagement” to Air in March; Aimee Chan Looks Forward to Returning to Work 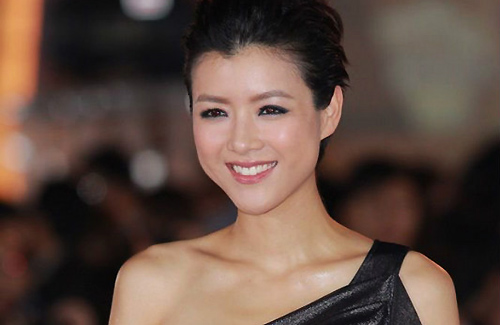 Although pregnancy was not a planned event for Aimee Chan (陳茵媺), she found joy in being a mother and often gushes about her newborn son, Aiden Joshua. Aimee maintains a positive outlook and hopes to balance her roles as a wife and mother while not giving up her passion in acting.

Aimee said, “My goal is to become a good actress. Even though I have a baby now, I still love to act. I hope being a mother will inspire me further, allowing my acting to be more mature and structured.”

Aimee started dating Moses Chan (陳豪) in 2011 and quickly moved in together. Highly promoted by TVB, Aimee’s pregnancy and marriage came as a surprise for many. But for Aimee, the pursuit of personal happiness is the most important. The couple originally planned to get married in December 2013, but Aimee’s pregnancy pushed the wedding earlier to June. Aimee said, “[Aiden Joshua] arrived a little earlier than planned. Afterall, Moses is older than me by 10 years, but my age is very suitable to give birth. I am very willing to pause my career to have a baby. This is the most perfect and happiest time.”

While filming Outbound Love <單戀雙城> in Malaysia last year, Aimee did not yet realize she was pregnant. Working more than 10 hours a day and even catching a flu, she even ate a lot of cold foods, which pregnant women would traditionally avoid. There was also a scene in the drama where she fell to the floor. Fortunately, this did not affect the fetus growing inside her. Once she realized she was pregnant after returning to Hong Kong, she immediately requested to stop all work in May 2013.

Although only a month since giving birth, Aimee has been busily promoting Outbound Love. Although still on her post-partum confinement, Aimee said she has not yet fully returned to work yet.

In March, Ruse of Engagement <叛逃> will finally be aired by TVB after being warehoused for two years. The drama partners Aimee with Ruco Chan (陳展鵬) once again, and stars Yoyo Mung (蒙嘉慧) and Ron Ng (吳卓羲).  With her dramas shown shortly one after another, viewers may not feel that Aimee was absent at all from the screen.

Plans for future TVB projects are already in discussion. In May, Aimee will be filming a TVB martial arts series with Anthony Wong (黃秋生).

Aimee believes she will be able to juggle between family and work. Aimee will have to coordinate with Moses and his family to help care for baby Aiden Joshua. “There won’t be reduction in work. I only hope to schedule my time properly….When one of us goes to work, the other must stay home. Love is about sacrifice. I believe [TVB] will understand.”

53 comments to “Ruse of Engagement” to Air in March; Aimee Chan Looks Forward to Returning to Work