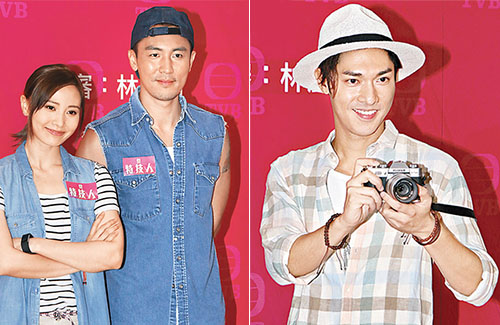 The Stuntmen’s main storyline centers on Shaun and Rebecca, professional stunt performers for the movie industry. Rebecca plays Kelly’s stunt double, while Kelvin plays a director. The Stuntmen is Rebecca’s first drama as a leading actress.

Rebecca expressed that one of her goals for this drama is to help the audience understand the hardships that many behind-the-scene crew members have to face. “This is definitely something different for me. I’ve always been just an actor but everything I’ll be doing for this show is what many of our behind-the-scene crew members and stunt doubles do for us. I hope after seeing the show people can understand that they’re very hard working too. Let’s all support them some more.”

Shaun, also a stuntman, plays an important figure in Rebecca’s life. He introduced, “My relationship with Rebecca is quite emotional. It’s a bit like [Chow Yun-fat’s] All About Ah Long <阿朗的故事>. I practically took care of her and raised her.” For his role, Shaun plans to earn a motorcycle license. “But rather than just focusing on the stunts, I really want to do well in giving a moving performance.”

Excited to film his first TVB drama, Kelvin said he expects to lose sleep over the next few months. “Many people have told me how hard it is, and they keep asking me if I’ll be able to handle it. I won’t be able to know until I try.”