Six TVB Dramas That are Still in the “Warehouse” 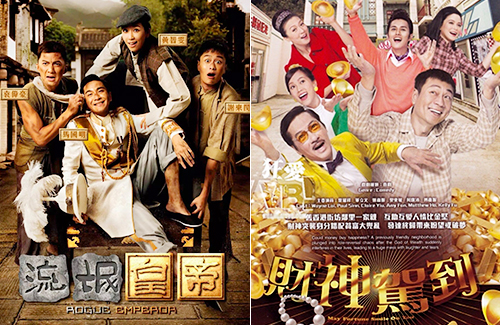 It was announced earlier last week that No Reserve <巾幗梟雄之諜血長天>, a Lee Tim-sing (李添勝) drama that had been kept inside TVB’s “warehouse” since 2013, will be premiering on TVB’s streaming service myTV SUPER this October. With its subject matter being too dark for a primetime network broadcast, No Reserve was shelved for three years before TVB finally made the decision of releasing it on their streaming service.

But No Reserve is not the only drama that had suffered years of broadcast limbo. Here are six other TVB dramas that are either still shelved, or have suffered multiple broadcast postponements.

Starring Kenneth Ma (馬國明) and Niki Chow (周麗淇), Rogue Emperor is a remake of TVB’s 1981 classic period drama The Misadventure of Zoo <流氓皇帝>, which starred Adam Cheng (鄭少秋) and Louise Lee (李司棋). Rogue Emperor, shot in early 2014, was originally scheduled for a release in August 2015, but TVB pulled the drama from its schedule last minute, opting to air Vincent Wong (王浩信) and Selena Li’s (李施嬅) Brick Slaves <樓奴> instead. Rumors at the time said Kenneth didn’t want to renew his TVB contract, which prompted the company’s decision to bench both Kenneth and the series. Kenneth, however, clarified in an April 2016 interview that he still has “some time” left in his contract, and has never said anything about not renewing it.

A comedy drama about office employees, Watch Out, Boss was shot in early 2015 and stars the semi-retired Flora Chan (陳慧珊). Though a broadcast date for Watch Out, Boss is still up in the air, it is highly likely that the show will eventually premiere on myTV SUPER.

Detective comedy Inspector Gourmet stars Kenneth Ma, Louis Yuen (阮兆祥), Priscilla Wong (黃翠如), and Eliza Sam (岑麗香), and was shot in early 2015. Though TVB promoted it as a 2016 drama, the company has yet to put Inspector Gourmet on their broadcast lineup for the year.

Starring Johnson Lee (李思捷), Jason Chan (陳智燊), and Mandy Wong (黃智雯), Daddy Dearest suffered several broadcast postponements this year. Shot in 2015, the family drama about struggling fathers was originally slated for a March 2016 release, but their schedule was replaced by Roger Kwok (郭晉安) and Tavia Yeung’s (楊怡) The Last Healer in Forbidden City <末代御醫>. It was then announced to be premiering in April, but Kent Cheng’s (鄭則士) My Dangerous Mafia Retirement Plan <火線下的江湖大佬> took its place. Daddy Dearest was postponed a third time when TVB announced that Lawrence Ng’s (吳啟華) Presumed Accidents <純熟意外> would be airing after Retirement Plan. It was finally announced last month that Daddy Dearest will be premiering on August 1 as part of the station’s Amazing Summer 2016 lineup.

Starring Michelle Yim (米雪), Ben Wong (黃智賢), and Elena Kong (江美儀), Kiss Me Mother made headlines back in May when production was halted for four days due to scriptwriting setbacks. After completion, producer Kwan Wing-chung (關永忠) announced his retirement. It is unknown if this production mishap would affect Kiss Me Mother’s broadcast.

6) May Fortune Smile On You <財神駕到>

May Fortune Smile On You stars Wayne Lai (黎耀祥) and was Lee Tim-sing’s last drama before retiring in March 2016. The comedy drama, produced at only 15 episodes, was originally slated to be TVB’s Lunar New Year drama for 2016. However, TVB pulled it off the schedule to air Short End of the Stick <公公出宮> instead, which coincidentally starred Wayne Lai as well. In regards to this change in schedule, Lee Tim-sing said, “Wayne Lai has a sitcom airing in April, so the company has to broadcast all of his dramas first. Short End of the Stick has 35 episodes while mine has 15. It makes sense for the company to air the one with 35 episodes first.”