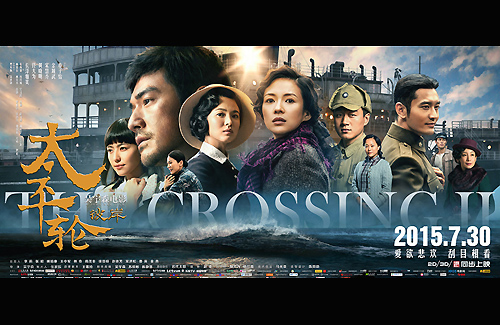 Since its release, The Crossing II <太平輪-彼岸> has inspired many viewers with its beautiful cinematography and moving scenes. The film stars Zhang Ziyi (章子怡), Takeshi Kaneshiro (金城武), Song Hye Ko (宋慧喬), Huang Xiaoming (黃曉明) and Tong Dawei (佟大為), all of whom impressed movie-goers in the emotional scenes. These scenes were a hot topic of discussion on the Internet, as viewers shared their favorite scenes in the sequel.

The “Most Beautiful Crying Scene” was difficult to choose, as the film was full of sad scenes. However, netizens concluded that the most beautiful crying scene in the film was played by Takeshi, when his character received a box of fragments from his faraway lover. The scene featured a close-up of Takeshi’s face as he sobbed silently, with tears flowing down his face. Viewers could immediately feel the sense of regret and hopelessness that overtook Takeshi’s character.

The “Most Beautiful Smile” was awarded by netizens to two particular scenes in the film.

The first scene was the one where Yu Zhen (Zhang Ziyi) reunited with her sweetheart (Tong Dawei), whose vision was distorted due to injuries suffered in the war. As Yu Zhen’s sweetheart slowly came to recognize Yu Zhen, she asked hopefully, “Do you still remember me? I’m Yu Zhen…” In response to this scene, one netizen commented, “This must be the best acting I’ve seen from Zhang Ziyi since The Grandmaster <一代宗師>! It’s just the right amount of sentimentality.”

The second scene was when Faye Yu‘s (俞飛鴻) character gave her children one last smile before she sank into the ocean. Faye’s character spent the entire film trying to look for her children who were separated from her amidst the ship’s sinking. When Faye was about to be engulfed by the waves, she finally spotted her children safely rescued by someone she once distrusted. Finally smiling, Faye’s character could face her death with no regrets. This scene was picked by netizens not only for its depiction of a mother’s love, but also for its depiction of our ability to trust in difficult times.

As the film revolves around three love stories, there was an abundance of beautiful dialogue. Netizens awarded the “Most Moving Line” to an unforgettable scene where Tong Dawei’s character could only helplessly and desperately shout, “Don’t touch my wife!” as the enemy troops descended on his wife. The love that Dawei’s character had for his wife was exemplified by the raw emotion in Dawei’s voice as he yelled at the enemy troops not to touch her.

Finally, for “Most Beautiful Reunion”, netizens were hard-pressed to pick between the three couples, whose struggles and moving love stories were unforgettable. Netizens eventually decided that Takeshi’s reunion scene with his lover, which took place in the character’s fantasy, was the most beautiful as it further emphasized the bittersweet longing experienced by the couple.

7 comments to “The Crossing II” Moves Viewers with Emotional Scenes