South Korean webtoon-based drama The Uncanny Counter has displayed its monstrous popularity by becoming the first OCN drama to rake in a double-digit rating in the cable network’s history. A second season is even confirmed to be in the works after the currently airing series amassed significant love across each highly-anticipated episode broadcasted so far. However, just when the story is about to reach the climax, the screenwriter’s sudden withdrawal from the show has caused a wave of unease among fans.

Scriptwriter Yeo Ji Na, who wrote the first 12 episodes, has left the production team after a disagreement with the staff on the storyline for the remaining four episodes. While it is not uncommon to see such changes occurring with dramas, it is quite rare for it to happen with such a popular drama. Not to mention, The Uncanny Counter is Ji Na’s first comeback project after 11 years. Despite the long break, her work has greatly showcased her dedication and enthusiasm.

After her leave, director Yoo Seon Dong temporarily took over and wrote episode 13. He has since passed the baton to writer Kim Sae Bom, who has written the final three episodes. Whether the story will head in a better or worse direction is unpredictable, as Sae Bom has not produced any works in 10 years. However, his debut film Hello, Schoolgirl in 2008 had been well-received.

This sudden change in screenwriters is inevitably upsetting fans, who are worried that the switch will ruin the series. They already expressed their disappointment in episode 13’s ending, and it has also been reflected in the latest average rating of 9.4 percent. The highest peak was 10.2 percent – a fall from the previous episode’s average of 10.581 percent. 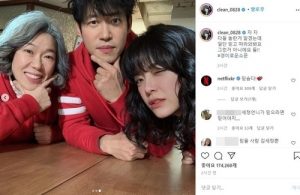 As episode 13 garnered heavy criticisms, actress Kim Se Jeong sought to relieve their anxious minds with an update on her social media. Posting selfies of her and co-stars Yoo Joon Sang and Yeom Hye Ran, she commented, “Okay, okay, I know everyone is scared, but please believe and stay with us!”