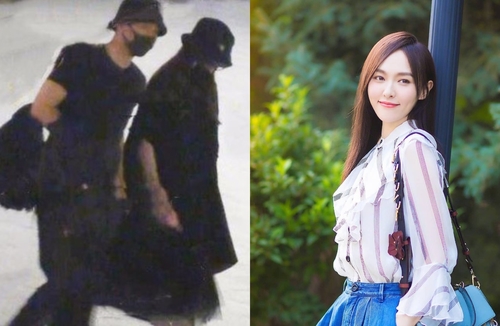 Although pregnancy speculations ran rampant ever since Tiffany Tang (唐嫣) and Luo Jin (羅晉) got hitched in Vienna, Austria last October, the rumors were only confirmed last month when Tiffany was photographed with a protruding baby bump. She appeared at least five months pregnant while she was out eating with Luo Jin and their families. The couple never acknowledged the pregnancy reports, but today, they finally decided to share the good news on Weibo.

Tiffany used emojis to express that two hearts equal a gift, indirectly announcing that she is carrying. Luo Jin then shared her post and wrote, “Sharing our joy with everyone.”

Since it is their first baby, the couple is very cautious when they’re out and about. When Tiffany was filming the new drama The Legend of Xiao Chuo <燕雲台> with Canadian-Chinese actor Shawn Dou (竇驍), she needed people to help hold her up, and she also walked cautiously.

Then, when the couple was photographed dining outside last month, Luo Jin never left her side. They tried to conceal their identities by wearing black outfits, black hats, and black masks, but the media was still able to recognize them. Reporters also spotted Tiffany’s protruding belly underneath her long dress.