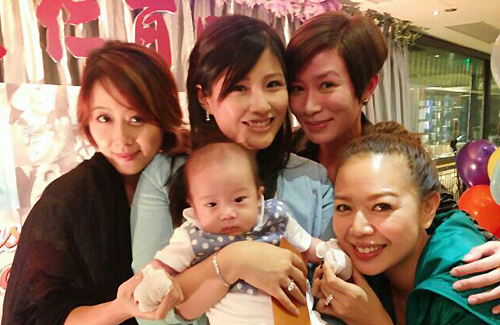 What was Sammo’s present for TJ? “Everything would eventually be his!” exclaimed Sammo with a laugh. Does Sammo want another grandchild? “It is up to [Timmy and Janet].”

Sammo also expressed that he is not interested in teaching TJ kung fu as he grows older, despite the evocative rumor claiming that the talented TJ was already turning and crawling around before turning three months old. “A lot of babies know how to turn around! No big deal!”

At the Hundred Days banquet, Sammo presented TJ with a large and colorful two-layered cake. The customized spectacle was decorated with Finding Nemo characters, along with a miniature version of a smiling TJ perching on the topmost layer. Matching his miniature figure, TJ wore a matching white outfit and a blue vest with white polka dots.

Despite the noisy crowd and hectic photo sessions, baby TJ was rather quiet that night, looking blankly at his parents and grandfather.