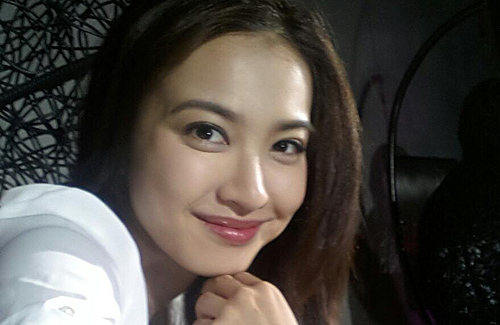 Tracy Chu (朱千雪) shot down dating rumors with Kenneth Ma (馬國明) on December 23, emphasizing that their friendship has no hint of romance whatsoever.

Not only is The Hippocratic Crush 2 <On Call36小時Ⅱ> her acting debut, the drama also generated her first major dating gossip. She was linked with TVB’s most eligible bachelor when the two were seen sharing a car ride home after attending their series’ finale event on December 15. Since Kenneth had earlier joked that he would like to be rumored with Tracy, some thought that he was professing his love and is currently in active pursuit of the pageant beauty.

Additional reports suggest that the two have been close throughout the past few months. Tracy was often seen by Kenneth’s side, and had even paid a visit when he was filming Cold Mountain, Hidden Dragon <寒山潛龍> this summer. She also allegedly went out of her way to become acquainted with Kenneth, showing up to his soccer games and made arrangements to sit near him at a recent TVB dinner. Kenneth himself also reportedly met Tracy’s mother and has happily won her approval.

Although Tracy did not directly deny these allegations at the time, she ultimately decided to clarify her relationship with Kenneth on yesterday. “We are not dating and are only friends. The reporters just happen to see us together when my mom and I hopped on for a free ride.” Even though her mother thinks positively of Kenneth, Tracy does not believe they are headed for romance, saying that she does not think Kenneth intends to pursue her.

While Kenneth may not be her Mr. Right, Tracy is not at all discouraged and is enjoying the single life. She has decided to leave her love life up to fate, and agrees that effective communication is the key a good relationship.