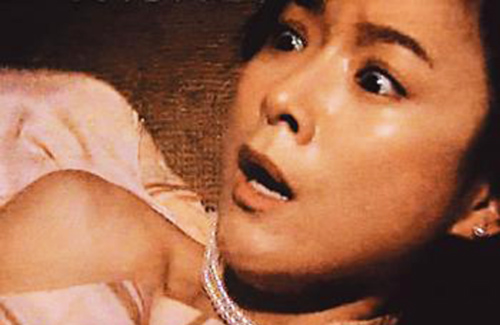 Above: Aimee Chan was raped in recently aired, “The Last Steep Ascent”.

In last night’s episode of TVB drama, Silver Spoon, Sterling Shackles <名媛望族>, Tavia Yeung’s (楊怡) character, Tsz Kwan, has a flashback describing how her virginity was forcibly taken away by gangsters led by Lo Meng (羅莽) who, after the rape, joked about how he never would have expected that she was still a virgin. As a result of the horrendous assault, Tavia’s character was unable to become pregnant.

In the current story arc in Silver Spoon, Sterling Shackles, Arthur Chung (Damian Lau 劉松仁) believes that Tsz Kwan is pregnant and requests his second wife Yee Yin (Idy Chan 陳玉蓮), to accompany Tsz Kwan to a check up. After the examination, the doctor asks Tavia whether anything traumatic happened to her in the past as there is a chance that she can no longer get pregnant. Tavia, horrified by the news, requests to be left alone and leaves the office.

The next scene reveals Tavia’s flashback of a terrifying rape incident from many years ago. After refusing to be friendly to local gangsters, she is forcibly taken to a warehouse and raped by multiple members of the gang.

To those who were disappointed with Kate Tsui’s (徐子珊) brief rape scene in Highs and Lows <雷霆掃毒>, the producer of Silver Spoon, Sterling Shackles promised, “This will last more than one second!”

In Highs and Lows, Kate was raped more than once, and in The Last Steep Ascent <天梯>, Aimee Chan (陳茵媺) became pregnant from rape. Apparently, the rape trend will continue. In the upcoming series Friendly Fire <法網狙擊>, Samantha Ko (高海寧) will be a rape victim, and Detective Columbo <神探高倫布> will feature a rape scene involving Natalie Tong (唐詩詠) who, during an interview, even joked about her realistic performance.

Ella Koon (官恩娜) was correct in her observation that many viewers are getting increasingly perverted, as they want more and more scenes of women being sexually assaulted. However, TVB should ultimately be held responsible in doing its part to feed the perverted fantasies of viewers.