It tells the story of Karson (played by Vincent Wong 王浩信), a former member of an Australia-based Chinese triad who carries out assignments that “cleans” the triad of its problems. His girlfriend Chloe (played by Kelly Cheung 張曦雯) convinces him of a better life outside of the triad. Karson agrees to leave that life behind, until Chloe dies of a horrible accident, and the triad accuses Karson of killing the boss. Karson escapes to Hong Kong, takes up a new identity, and works as a physical education teacher at a high school. He befriends the high school teacher Jovy (played by Natalie Tong 唐詩詠), who turns out to be the daughter of triad leader Chiang To (played by Law Lok-lam 羅樂林). Chiang To is willing to leave his underground life behind, but finds it difficult to complete break away due to his history. Karson has no choice but to step in as the school’s “fixer”, defending it from enemies. 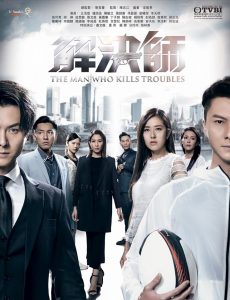 Meanwhile, star policeman Man Ho-chuen (played by Jonathan Cheung 張頴康) is determined to wipe out Hong Kong’s organized crime, but the uncovering of one truth led him to a path of no return.

It is a very familiar genre. Stories about the police and organized crime have always been TVB’s forte. Dramas such as Line Walker <使徒行者> and E.U. <學警狙擊> have released successful sequels and spin-offs, and while this genre is nothing new, audiences are just as eager to take it all in again. TVB has confidence in The Man Who Kills Trouble for delivering solid entertainment.