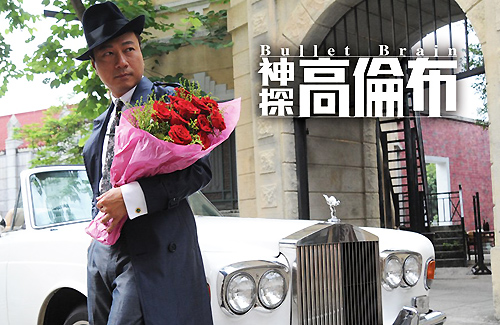 Reception has not been faring well for Lee Tim Sing’s (李添勝) latest drama, Bullet Brain <神探哥倫布>, and with five episodes already aired, viewers still do not exactly know what they are watching.

It would be inaccurate to consider Bullet Brain a comedy, yet it would also be erroneous to consider Bullet Brain a serious drama. The main characters are either annoying or dull, and the storyline is criticized for being too slow-moving and unexciting.  The series is also ridiculed for its inaccurate use of props, in which a nineties model minivan and a 2010 cigarette brand made appearances in the show.  Many netizens expressed that they have already given up watching it.

Bullet Brain, which is set in 1960s British Hong Kong, is a story about a simple-minded country boy who turns into a ruthless but brilliant detective after he gets shot in the head. Wayne Lai (黎耀祥) stars as the titular protagonist Detective Columbo. Rising stars Ngo Ka Nin (敖嘉年), Sire Ma (馬賽), Edwin Siu (蕭正楠), and Natalie Tong (唐詩詠) also lead in the drama.

Tim Gor promised viewers that the story will pick up soon, exclaiming, “It is not a comedy! Just watch it! The story will start to get good in the second week when Natalie Tong appears. I promise it will be worthwhile!”

Entrusting his drama into the hands of rising actors, was Tim Gor intending to introduce new siu sangs and fadans to TVB? “Of course! I am confident with Natalie’s performance. She plays both mother and daughter. Her character will also have a touching end.”

As for Sire Ma, Tim Gor said, “Her character is more challenging than Natalie’s, and Sire handled it really well.” At the mention of Edwin Siu, Tim Gor praised, “He is a very versatile actor. He can do both good and evil roles.”

Bullet Brain was produced in the summer of 2012, during a time when many TVB scriptwriters and producers left the company for rival stations. At the time, Tim Gor complained to the press that he lacked personnel for his creative team and the drama was on the brink of cancellation. Perhaps Bullet Brain’s suffering script was due to TVB’s own talent drain?