Louis Cheung and Tavia Yeung Lead “Against the War of Tangxi” 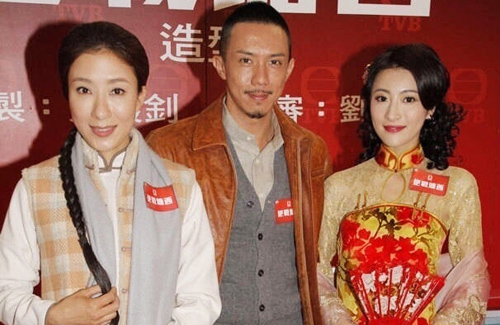 With his rising popularity, Louis Cheung (張繼聰) takes the lead for the first time in new TVB drama, Against the War of Tangxi <逆戰塘西>. He will be collaborating with leading lady Tavia Yeung (楊怡) for the first time. Lin Xia Wei (林夏薇) and Matt Yeung (楊明) round out the supporting cast.

Set in the 1930s, Tavia portrays a Majie, a female worker who undertook a vow never to marry. Tavia will have romantic storylines with both Louis and Matt, but no intimate scenes. Tavia praised Louis for his good acting, but was asked whether she was expected to lead the entire production due to the many fresh faces among the cast. Tavia expressed humbly, “No, that’s absolutely not true. [Having new faces] makes a drama more interesting. I cannot say that I am the leader of the cast, as I still have a lot to learn.”

Playing a corrupt police officer, Louis cut his hair short to fit the image. Although this is the first time he is playing a lead role in a television drama, Louis does not feel stressed, “That’s because I see myself as the lead actor no matter what role I’m playing, and always give my all in delivering the performance.” Louis also mentioned, “I’m in a love triangle with Tavia and Xiawei, but I have not seen any mention of an intimate scenes in the script so far. Many of the scenes take place in the rural mountains, so I expect to be running strenuously for the next two months [during filming].”

Playing a prostitute in Tangxi, Xia Wei will have to adopt coquettish mannerisms and don sheer lace dresses. She admitted that she found the role to be challenging, although she tried to consult films such as Rouge <胭脂扣> to understand the culture in Tangxi.

On the subject of her cousin Raymond Lam (林峯) signing a HKD $100-million contract with Emperor Entertainment Group, Xia Wei expressed support and wished him a successful career.