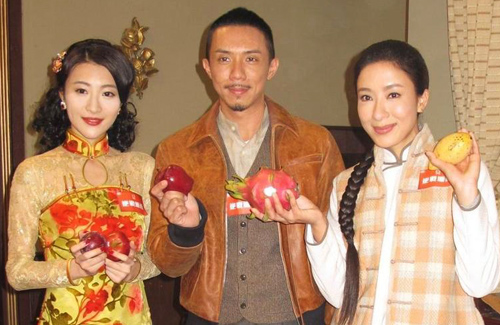 Tavia Yeung (楊怡), Louis Cheung (張繼聰), Lin Xia Wei (林夏薇), and Matt Yeung (楊明) attended the blessing ceremony for new TVB period drama, Against the War of Tangxi <逆戰塘西>. Discussing his first time as first male lead, Louis revealed that he will get to see Tavia’s bare back in the series.

Tavia takes on the role as a “Ma Jeh”, a woman who vowed to not marry and remain celibate for life. During a scene, police officer Gam Wah (Louis Cheung) accidentally stumbles upon Leung Sum (Tavia Yeung) as she is taking a bath and falls in love with her. Unaware of Gam Wah’s presence, Leung Sum proceeds with her bath and ends up revealing her bare back. Not embarrassed by scene, Tavia stated, “In the series, Louis peeps on me while I’m taking a bath and I have to reveal my naked back. However, it’s not going to be something sexy.”

Promoted by TVB in the recent years after his debut in Inbound Troubles <老表，你好嘢!>, Louis has been promoted to leading status. While Louis nervous on his first-time collaboration with the TV Queen, Tavia also admitted to feeling a slight pressure on working with Louis. Tavia praised his acting, “I watched him in Black Heart White Soul <忠奸人> and his performance was very good. He has pressure, but I have pressure too. Even though we haven’t been working with each other for long, we’re already good friends and have a good chemistry.”