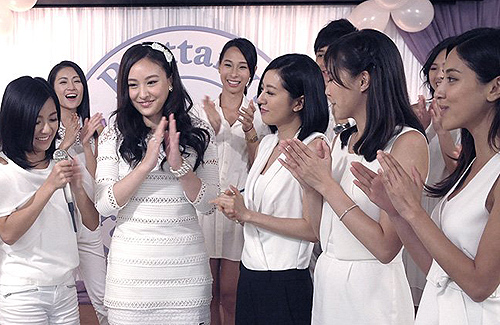 TVB is often criticized for using a similar lead cast over and over again in its television dramas, but producer Joe Chan (陳維冠) hopes that his new legal drama Raising the Bar <四個女仔三個BAR> will dismiss these criticisms.

“People always say [TVB dramas] use the same cast,” said producer Joe Chan. “The company actually has many actors with great potential. We should let them develop.”

Joe Chan praised the rookie cast of Raising the Bar, expressing that the girls are very hard-working and they all have great chemistry with their senior costars Ben Wong(黃智賢), Ram Chiang (蔣志光), and Timothy Cheng (鄭子誠). “I’ve watched the girls slowly improve with each performance. I am especially proud of the scene where Louis Cheung (張繼聰) confesses his love for Grace, and Grace’s expression of wanting to both accept and refuse him was done very well.”

Moon Lau gave a very tear-jerking performance in a scene where she rejected a marriage proposal. The tomboyish Stephanie Ho did an excellent crying scene when she finally forgave her inmate father. Jeannie Chan had a very heartbreaking scene which involved her crying in front of her father’s grave.

Joe Chan also shared that the girls got along really well behind-the-scenes, and that they often chatted in English.

Besides the rookie actresses, TVB artistes Elaine Yiu (姚子羚) and Natalie Tong (唐詩詠) also had eye-catching performances. Joe praised Elaine, “Her acting was much more mature and she was able to share her experiences with [the rookie actresses]. Whether it was their characters or in real life, their relationship was like that of a mentor and students.”

Natalie Tong portrays Jeannie Chan’s older half-sister who has an extramarital affair with Timothy Cheng. Joe Chan said, “Natalie Tong was a big help, because I wanted someone who has the acting skills but appears very youthful. As for Timothy, he is always playing villains. This time, his character is very humorous. An actor can have many faces, and I want to give the audiences a fresh [cast].”

69 comments to “Raising the Bar” Aims to Introduce New Stars