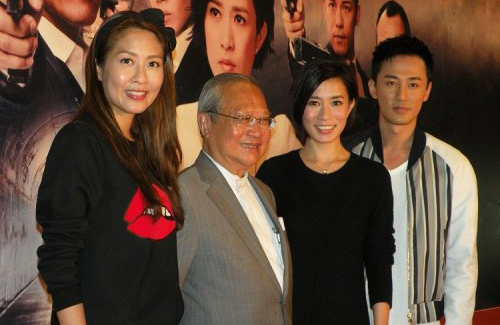 Although Line Walker <使徒行者> finished airing already, the popularity of the drama remains high. After announcing a film version to be produced, TVB Chairman Norman Leung (梁乃鵬) held a celebratory dinner for the entire cast and crew.

Although Line Walker is Raymond Lam’s (林峯) last drama for TVB, he still attended the celebration dinner. He stated that he maintains a good relationship with the station even with the recent signing of a three-year contract with EEG. Raymond said, “Right now, I’m focused on music because I haven’t released an album in awhile – I’m going to do that first. As for movies, the company is currently helping me with the arrangements but I can’t talk about that right now! Previously, my Mainland drama, The Virtuous Queen of Han <衛子夫> garnered good ratings and I’ve been pursued by a lot of companies in Mainland. But I want to find a script that I like.”

Charmaine Sheh (佘詩曼) and Kevin Cheng’s (鄭嘉穎) dating rumors sparked again after they attended Raymond Cho’s (曹永廉) birthday bash last week. Charmaine explained that there has been a big misunderstanding, “There was another party next door. We partied separately, but we did chat. We haven’t been in contact for a while. Since I was a little drunk that night, I don’t remember what happened. However, we did have a lot of fun.”

When asked if there is a possibility of rekindling the relationship with Kevin, Charmaine added, “You have to ask God. Everything is up to fate!”