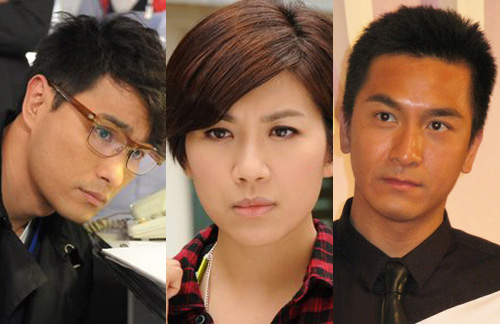 Every year, only a few lucky actors manage to journey up to the top of TVB stardom, but in 2013, expect to watch out for the breakout of six!

Faced with strong competition against new up-and-coming television station, City Telecom, TVB is pressured to introduce new faces in their dramas in order to keep their station fresh, lively, and competent for the oncoming television battle.

After winning Miss Chinese International crown in 2009, Christine quickly climbed up the television ranks. She had a major role in her debut television drama, Don Juan De Mercado <情人眼裏高一D> in 2010, and has since appeared in five Hong Kong films. As one of TVB’s first generations of goddesses, Christine is also very popular among endorsers. Along with her good looks and diligent work ethics, it will not take long until Christine sees stardom, and 2013 may be the year she sees it.

Mandy’s breakthrough performance in L’Escargot <缺宅男女> has won the hearts – or hatred – of the Hong Kong audience, and in a scenario of nearly no strong competitors, Mandy won 2012’s Most Improved Actress award in a landslide victory. “I have many expectations for next year,” said Mandy. “I hope that I will have another breakthrough, that the audience will be able to see a different side of Mandy Wong.” Mandy explained that she is exceptionally confident and proud with her performance in the upcoming A Change of Heart <好心作怪>, and revealed that the producer allowed Mandy to design the role herself. “I hope to continue to rise to the top.”

Kenneth may already one of TVB’s most popular stars, but the leading actor has no means of slowing down. Next year will be an opportunity for Kenneth to shine and compete for the Best Actor honors. As for his career prospects in 2013, Kenneth said, “Of course I would like to take a step farther, but I would not pressure myself too much about it. Sometimes luck depends on the script, and not just by performance. Although I have many dramas lined up for next year, I am afraid that I will not be able to provide enough freshness for the audience. I am not stressed about The Hippocratic Crush sequel. Whenever I film a drama, I would always maintain a playful mood so I would be able to have the courage to try new things, to give myself more chances for improvement.”

Unlike all the actors on this list, Ruco became an instant leading star after starring in just one drama. Indeed, Ruco was the biggest breakout star of 2011, thanks to his commendable performance in The Other Truth <真相>. But what happened to Ruco in 2012? With only two dramas having aired so far, could Ruco be running out of favor with TVB already? Those fears can now be tossed out of the window, because 2013 may be Ruco’s year to shine again.

Six of Ruco’s yet-to-air dramas are currently planned for next year. With so many dramas up his sleeves, Ruco is currently the most highly-utilized actor at TVB. Ruco said, “I am very happy and lucky to be able to film so many different kinds of dramas. I also really enjoy the filming process. To be honest, I am not that stressed about it. I only hope that the audience will enjoy my performances. Personally, I like Ruse of Engagement <叛逃> and Big Wheel <巨輪> the most. I had many action scenes, and many of them were without stunt doubles. I hope to bring the audience film-quality television entertainment.”

When it comes to listing out the rising stars of 2012, Oscar definitely tops that list. Oscar received acclaim for his performances in L’Escargot, Tiger Cubs <飛虎>, and The Confidant <大太監>. It is no surprise that Oscar won this year’s Most Improved Actor award. Besides dramas, Oscar also had the opportunity to perform in the big screen. In 2012, he had a supporting performance in Natural Born Lovers <天生愛情狂>, and in January 2013, Oscar will star alongside Him Law (羅仲謙) in Young and Dangerous: Reloaded <古惑仔：江湖新秩序>.

After Oscar, Eliza is the next biggest, and fastest, rising star of 2012. With Eliza’s effortlessly cute appearance and personality, Eliza has the won the hearts of both men and women. Eliza quickly shot to fame after the broadcast of Divas in Distress <巴不得媽媽…>, and became a popular favorite among producers and endorsers. Eliza will star in at least four dramas in 2013, and this time, she may have a higher chance in bringing home the Most Improved Actress award new year. “I really want to thank the producers and the company for giving me so many opportunities this year,” said Eliza. “I have pressure, but I will not have it affect me. I hope that I will do better in the future, do all my roles justice, but what I hope the most is to get recognized by the audience for my talents. I should only win an award when I am ready.”