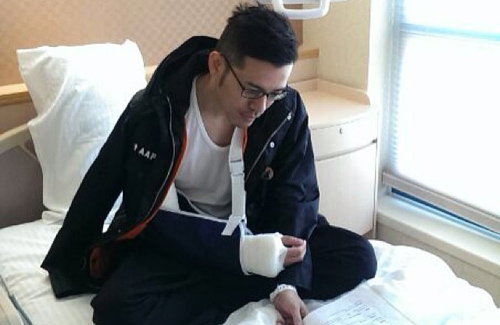 The production of crime thriller The Apostle <使徒行者> faces yet another roadblock after Sammy Sum (沈震軒) seriously injured his wrist while shooting an action scene.

The Apostle has seen several unexpected casting changes since its initial announcement. Originally written to star film king Tony Leung Ka Fai (梁家輝), his character was later left out of the script when he withdrew due to an injury. The production was close to losing Charmaine Sheh (佘詩曼) as well because of a herniated spinal disc prior to filming, though luckily she recovered in time. Last month, Sammy Leung (森美) also left the cast citing high stress. Sammy Sum was re-cast for the role and had to do  a majority of re-shoots.

Just a few weeks into his new role however, Sammy suffered a serious injury that threatens to once again delay the production. Filming on location on March 18, Sammy was riding a bicycle at high speed to chase after a thief. Unable to brake in time, Sammy crashed the bike and fell onto the ground, landing on his right hand. The crew immediately sent Sammy to the hospital for x-rays, and it was determined that his right wrist was fractured due to the impact.

He was admitted to the hospital the next day to prepare for his surgery scheduled for March 21. Keeping a positive spirit, Sammy posted photos of his cast on Weibo and assured fans that he is fine. Despite the dangers associated with filming an action-packed series, Sammy is not scared by this accident and hopes to return to the set as soon as possible. “The more difficult it is, the better I must do. Hopefully the series will generate major interest when it airs.”

Since Sammy will require some time to fully recover, filming will be delayed for a few weeks and may not wrap until the end of April. Director Man Wai Hung (文偉鴻) stated he has no plans to replace Sammy, and will assign a body double to perform his future action scenes.

13 comments to Sammy Sum Fractures Wrist While Filming “The Apostle”