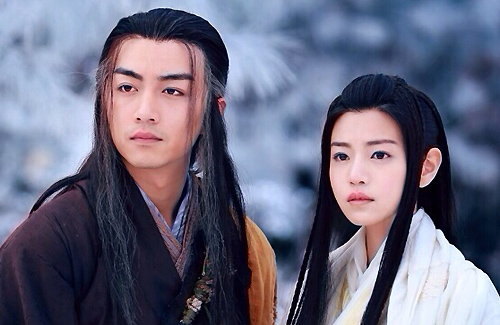 The Condor Heroes <神鵰俠侶>, starring Chen Xiao (陳曉) as Yang Guo and Michelle Chen (陳妍希) as Little Dragon Girl, released its first trailer yesterday. Though netizens had previously expressed doubt about the leads, many of them were impressed by Chen Xiao and Michelle’s acting in the preview.

As the newest adaptation of Jin Yong’s (金庸) classic wuxia novel, producer Yu Zheng‘s (于正) The Condor Heroes has been the subject of much dispute since it began filming last year. Michelle was frequently criticized for being too chubby to play the ethereal Little Dragon Girl, while Chen Xiao was thought too young to portray the older version of Yang Guo.

The released trailer gave audiences their first chance to judge Chen Xiao and Michelle on screen. Near the beginning of the video, the two are seen meditating and practicing martial arts in a field of flowers. Their romance seems to be developing well, until one caption hints at their impending separation: “Forever in my heart, though no longer by my side.” As expected, the trailer then shows the many ensuing difficulties that Yang Guo and Little Dragon Girl undergo.

After watching the trailer, some netizens changed their tune about Michelle, saying she comes across better in moving video than in still photographs. However, others were still dissatisfied, claiming they were “unable to accept Michelle’s baby fat.” In response, Chen Xiao defended his costar: “I know that the previous versions of Little Dragon Girl are classics, but completely denying the drama before it airs is not fair to the actors.”

Since Yang Guo and Little Dragon Girl are separated for 16 years, netizens wondered if Chen Xiao, who is only 26 years old, could portray post-separation Yang Guo with enough poignancy. After seeing the scenes in the trailer, many netizens commented that Chen Xiao had not disappointed them and that his acting had improved. His fans are also eager to see how playing Yang Guo will affect Chen Xiao’s career, as the character has boosted the career of actors who portrayed him in previous adaptations, such as Andy Lau (劉德華), Louis Koo (古天樂), and Huang Xiaoming (黃曉明).