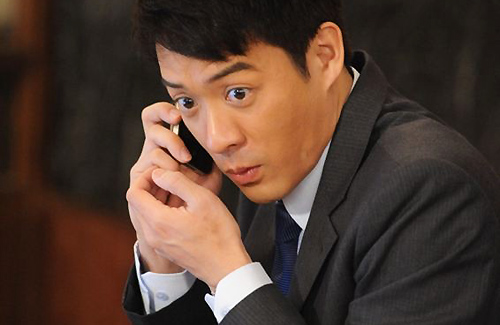 Above: Jason Chan stars as “Ming”, a lawyer in TVB drama, “Will Power”.

Possessing the qualities of a London-bred gentleman, Jason Chan’s (陳智燊) healthy, well-behaved, and professional image sits well with the audience. With nine years of industry experience already behind his back, it is about time for the British-born Jason Chan (陳智燊) to try something new in his career, but Jason does not think he’s ready for an image makeover.

“I do not have much experience when it comes to acting. I am still in the process of learning. Let’s not talk about Wayne Lai (黎耀祥), but I even have a lot of things to learn from Kenneth Ma (馬國明)! He’s always been marked with that positive and well-behaved image, and look at how successful he is with that today!”

Of course, a competent actor is one who is skilled to portray any kind of role convincingly, whether it is a doctor, a CEO, or a triad member. Jason has his goals marked, and though he aims to be a multifaceted artist like Wayne Lai, he does not think changing his acting track is necessarily a good thing at this stage of his career. “You can’t hope for a change if you can’t even handle a character that is similar to yourself. Right now, everyone sees Jason Chan is a good boy with a healthy image, that I am suitable to play professional people like lawyers. I will not suddenly demand to portray a triad role.”

He said he does not mind getting stereotyped to play goody-two-shoes roles, because actors who play villains can get stereotyped as well. He explained that even critically-successful actors like Huang Xiaoming (黃曉明) had to go through a period of portraying idealized roles before gaining enough experience and familiarity the audience before branching out to try different roles. Jason is in no hurry to change.

As Ming in “Will Power”

In the anniversary drama Will Power <法外風雲>, Jason portrays the rookie lawyer Ming. When reading the script to prepare for his role, Jason expected Ming to turn into a villain, but although he never did in the end, Ming still went through life-changing obstacles that were just as challenging to portray if he was a villain.

“He’s very righteous and filial. Halfway into the story his personality turns really aggressive, which I can understand, because he is trying to protect his mother.”