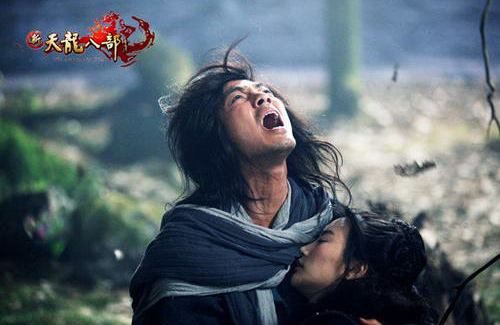 Despite being considered one of this year’s most anticipated wuxia dramas, the newest television adaptation of Demi-Gods and Semi-Devils <天龍八部> has been officially pulled from Hunan Satellite TV’s broadcast schedule because of its subpar performance.

Originally scheduled to air three episodes a day, Demi-Gods and Semi-Devils was cut to a single 25-minute-long episode per day in order to accommodate the airing of Mao Zedong. The ensuing awkward editing caused Demi-Gods to fall as low as number 18 in the ratings.

To make the situation worse, Zhejiang Satellite TV also began broadcasting Demi-Gods in mid-January. Airing three episodes a day, the Zhejiang TV broadcast did not suffer the same edits as that of Hunan TV, leading to better reception from viewers. Moreover, Hunan TV’s loss of its exclusive broadcasting rights threatened the station’s advantage with advertising companies.

After 42 episodes had aired and with just 24 more episodes to go, Hunan TV decided to cancel the remainder of Demi-Gods – the second time in the past three years that the channel has made such a choice.

Director Samson Lai (賴水清) expressed unhappiness regarding the many edits that had plagued the Hunan TV broadcast of Demi-Gods, which he thinks was the cause for the falling ratings. “Because they aired only twenty minutes per day, the number of episodes has gotten disordered,” he pointed out. “[This] messed up the audience’s viewing habits – watching only a little bit each day cannot satisfy the audience’s enthusiasm. They may even have felt like they were overlooked, so they switched to watch Zhejiang TV.”

However, Lai conceded that he has no control over his projects after they finish production, since directors cannot demand that their creations remain intact and unedited. Although SARFT created a new stipulation in 2010 that sought to prevent television stations from editing dramas at will and thus “infringing on the lawful rights of the pertinent copyright holder,” editing remains a common occurrence.

One business insider revealed that as long as stations do not cut out the list of credits at the end of each episode, then any other edits they make cannot be considered violation of the law. “SARFT has not issued any regulations regarding other issues, such as how many episodes to broadcast or whether the content needs editing,” the insider added, “so the station has the right to decide.”

As Huace Media’s first adaptation of a Jin Yong (金庸) novel, Demi-Gods features mostly actors signed to the production company, including popular mainland Chinese actor Han Dong (韓棟). However, his screentime was significantly cut in the Hunan TV broadcast, and his character, Xu Zhu, ended up appearing only in the very last aired episode.

“Xu Zhu is one of the three main characters – how could he appear for just a little bit? Can this still be considered Demi-Gods and Semi-Devils?” wrote one irate Han Dong fan on Sina Weibo. His fans also clamored for Hunan TV to issue an apology to their idol, calling the station “immoral” for their senseless editing.

Li Meng (李萌), a member of Han Dong’s promotional staff, revealed that the actor is currently on vacation and did not know about his deleted screen time prior to the broadcast. However, he plans to send autographed photos to his fans to thank them for their support.

Though Han Dong is reportedly optimistic about the situation, Li feels that the actor was wrongly treated: “He spent two to three months filming this… [and] the weather is extremely cold when you’re filming at Hengdian [World Studios] in the winter. We were also extremely cooperative during promotions.”

It is rumored that Hunan TV will rebroadcast Demi-Gods in its entirety during the daytime, though a specific timeslot is still being negotiated.