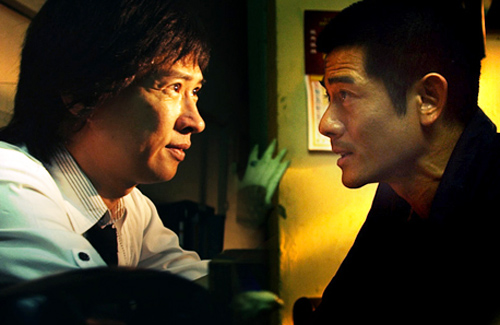 The Detective 3 Conspirators, is the third story of an action-packed crime thriller that involves Aaron Kwok’s Chan Tam, a lousy and inexperienced private detective who becomes notorious after solving a near-impossible case. In Conspirators, Tam arrives in Malaysia to investigate his parents’ mysterious deaths, but hidden forces are preventing Tam from discovering the truth. Powerless and in danger, Tam invites the help of odd private investigator, Cheng Fung Hei (Nick Cheung 張家輝), to investigate the mystery.

Oxide Pang said, “Every character is gray. They may look reliable on the surface, but they are unpredictable and calculative. Everyone is hiding a secret, and everyone is using a lie in exchange for the truth.”

Aaron was thrilled to return for the role of Chan Tam, and said, “I have confidence in doing well in the role. This is my third time as Tam, and I am already familiar with this character’s background. I am a detective in spirit.”

The film will open in Hong Kong on April 11.