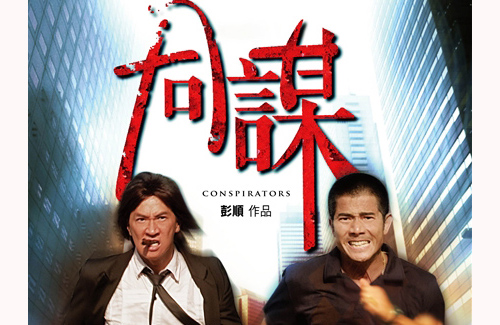 Aaron reprised his role as private detective Chan Tam in this third and final installment of Oxide Pang‘s (彭順) The Detective <C+偵探> trilogy. In the film, Chan Tam travels alone to Malaysia to investigate his parents’ mysterious deaths. Lost in an unfamiliar land, Chan Tam recruits local detective Cheng Fung Hei, played by Nick Cheung, to help him uncover the truth. The two detectives face many conflicts and life-threatening dangers along the way, forcing both to question each others’ true intentions.

While Nick filmed several physical fights for the movie, Aaron was asked to perform the majority of the dangerous stunt sequences. He was often seen jumping from buildings and running from massive explosions. During a major action sequence, Aaron ran from an oncoming train, jumped over the overhead railway, and fell into the food stalls below. He tumbled through several tables and finally landed on the ground.

The crew discovered afterwards that Aaron had injured his hand during the scene and was bleeding profusely. Aaron remained professional, and successfully completed the scene without any complaints.

During an interview, Aaron was asked if he is looking forward to winning awards for his efforts in this film. Aaron said he will not put too much hope on it, since hope may create bigger disappointments and will only hamper his acting.

When asked to comment on not making the Best Actor shortlist for his film Cold War <寒戰> for the 32nd Hong Kong Film Awards, Aaron admitted his disappointment. “I hoped to receive encouragement, but the judges didn’t find [my acting] satisfactory by their standards. I asked myself if I really performed so poorly that I didn’t even receive a nomination? I truly gave it my all. Now I just hope that the director, the audience, and the sponsors will see my efforts and will offer me more projects and thus more opportunities to be nominated in the future.”