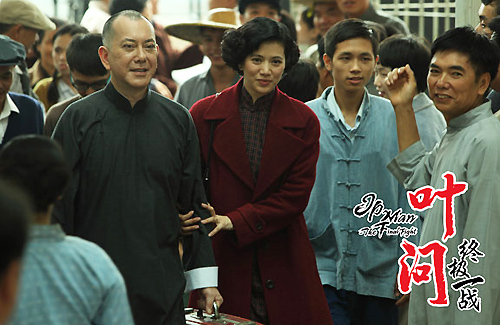 Will Anthony Wong (黃秋生) do justice to the role of an aged Ip Man in Ip Man: The Final Fight <葉問：終極一戰>? The film will focus on Ip Man’s final years in 1950s Hong Kong, including his quiet but close relationship with his wife, Cheung Wing Sing, portrayed by Anita Yuen (袁詠儀).

A sequel to The Legend is Born – Ip Man <葉問前傳>, Ip Man: The Final Fight is filled with Wing Chun action stunts and present the lesser-known aspects of Ip Man’s abject life in Hong Kong in the 1950s when things were not going well for him.  It was said that when Cheng Wing Sing visited Ip Man in Hong Kong, she was heartbroken that the previously affluent Ip had to live in destitution. However, knowing her husband’s determination, she played the role of a dutiful wife and quietly supported her husband.

Anita Yuen spoke of her role as Ip Man’s wife, “I greatly admire Cheung Wing Sing and women of her generation for their sacrifices for their husbands and children. But they do not have the freedom and financial independence of women in this generation. I’m glad I am born in this era, where I can have my own career and a family to go home to.” Anita will also share many scenes with Anthony Wong in Ip Man: The Final Fight. In one scene when Cheung Wing Sing arrived for the first time in Hong Kong, she had to share a small blanket with her husband. This is one of the most touching scenes in the movie, showing the quiet love between husband and wife when each tried to let the other have the blanket. Eventually, Ip’s disciples brought another blanket for their master. With the bigger and thicker blanket, the couple was able to snuggle under the warmth of the blanket.

Though Anthony and Anita are close friends, it is their first time playing husband and wife. Whispering sweet nothings at such close proximity on the bed proved to be awkward. The two veterans could not get the scene right until Anita pretended to bask in her husband’s voice with closed eyes.

Anita said, “I believe viewers will have mixed feelings after watching this movie. The portrayal of Ip Man in this movie is most like the man himself. Viewers will get to see how life is like in Hong Kong in the 1950s. Though I was not born at that time, I have heard so much about it from the elders to know the movie’s depiction is accurate. And this is where this movie is different from the others.”

A collaboration between National Arts Television Productions Ltd and Emperor Motion Pictures, Ip Man: The Final Fight will open in theaters on March 28, 2013.

4 comments to Anthony Wong and Anita Yuen in Bed Scene for “Ip Man: The Final Fight”