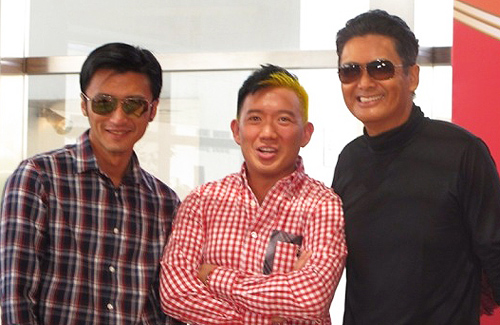 It has been 30 years since Chow Yun Fat last filmed a local Hong Kong movie. He recalled that his last Lunar New Year film was 1988’s Eight Happiness <八星報喜>, which was directed by Johnnie To (杜琪峯). Fat Gor expressed that he is looking forward to his “TVB comeback” and exclaimed that his costar, Nicholas Tse, had always been his idol.

“[Nicholas] is my idol. If I don’t film a movie with him, I don’t know how I’m going to face his dad (Patrick Tse 謝賢) and mom (Deborah Dik 狄波拉)… his father took great care of me years ago, and I will always try my best to see if I can bully [Nicholas]!” Fat Gor joked.

Fat Gor added that he had been watching over Nicholas as he grew up, got married and had kids. Nicholas laughed and said, “Now I’m divorced.” Fat Gor immediately replied, “Wow! Faster than me!”

With his slicked back undercut and black shades, the press remarked that Fat Gor had the aura of a captain. Even Triumph in the Skies 2 <衝上雲霄II> captains Sam Gor (Francis Ng 吳鎮宇) and Jayden Cool (Chilam Cheung 張智霖) will have to stand aside and make way for him! Fat Gor immediately said, “Don’t say that. They are my idols!”

Fat Gor exclaimed that he is an avid follower of TVB dramas and has been watching Triumph in the Skies 2 and Karma Rider <師父·明白了>. He said, “Kenneth Ma (馬國明) [in Triumph in the Skies 2] is a baddie… he has so many girlfriends. I don’t understand why [Myolie Wu (胡杏兒)] has to be so cold to her elder brother. It’s like he killed someone or something. The 8:30 pm show [Karma Rider] is pretty good too! Priscilla BB (Priscilla Wong 黃翠如) is not bad!”

Asked if Fat Gor will be willing to shoot a bed scene for a film, he said, “I don’t mind, but I don’t know about my wife.”

Though the cast are good friends with director Wong Jing, the Casino director clarified that the entire cast were paid with their market prices. Wong Jing hinted that Fat Gor was paid with an astronomical fee, saying, “Whatever Hollywood gave him, I gave him. If I have the budget, I should give my friends these benefits!”

Despite the title, Wong Jing assured that the film would cover family-friendly topics. “It is a co-production after all. Mainland China has over 1.3 billion people, and we have responsibility to educate their children. This film will not encourage gambling.”