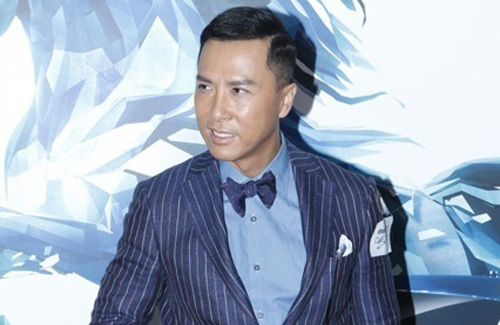 As one of the most bankable action stars, 51-year-old action star Donnie Yen (甄子丹) has been filming movies back-to-back. After more than three years since it was announced that Donnie will return for Ip Man 3 <葉問 3>, the project is finally ready to start principal photography.

As the Derby Ambassador for the third year, Donnie attended a racehorse event yesterday. Donnie expressed his desire to become a horse owner. Although he does not own a horse, reporters teased whether he will instead buy a new car. Donnie said, “I do love nice cars, but I rarely buy luxurious things. I will have to ask my wife first!”

With the filming of the popular franchise Ip Man 3 in a few weeks, Donnie revealed that director Wilson Yip (葉偉信) asked him to lose 30 pounds for the role. Donnie laughed and said, “I am around 145 pounds right now, so it’s impossible to lose 30 pounds. Not only will I go to the hospital, I might die!”

Standing at 5 feet 9 inches, Donnie weighed approximately 120 pounds at his lightest. Donnie revealed that he was at his heaviest around 160 pounds and was nicknamed “Fat Boy Don.” When asked whether his wife Cecilia Wang (汪詩詩) monitors his weight, Donnie smiled, “When we were first married, Cecilia said she wanted me to have a belly because it is better to squeeze!”