With Donnie Yen (甄子丹) taking on multiple roles as producer and lead actor, and deeply involved in both pre- and post-production, Sakra <天龍八部之喬峰傳> which was made on a 220 million HKD budget, has got viewers excited about its upcoming release. However, Donnie recently expressed that the blockbuster epic will not be released in theaters during the Lunar New Year 2023 season, but will be streamed online instead!

Starting filming in July this year, Sakra was shot on location in Jinghu and Shaanxi, China; Donnie and his wife Cissy Wang (汪詩詩) were spotted checking out filming sites and started picking out potential lead actresses. The 59-year-old action star had previously put word out that anyone who has undergone plastic surgery will not be considered. After publicizing that he was on the lookout for those with both good looks and acting chops, the role of “A’ Zi” eventually went to Hong Kong Film Awards Best Supporting Actress winner Cya Liu (劉雅瑟), while “A Chu” would be played by Chinese actress Yukee Chen (陳鈺琪). 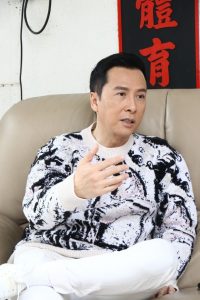 One of Hong Kong’s top action stars, Donnie personally coached Cya on the film’s fighting scenes. While the cast was keen to celebrate her Hong Kong Film Awards win, Cya made sure she seized the chance to learn the ropes from Donnie. The film’s other lead actress Yukee also shared that she had to spend many hours putting on a headgear for her bald scenes. Putting in lots of heart for the film, Donnie too quickly returned to Hong Kong to keep an eye on post-production once filming wrapped in July.

Given the scale of the production, news that the film would follow in the footsteps of co-producer Wong Jing’s (王晶) two other epics New Kung Fu Cult Master 1 <倚天屠龍記之九陽神功> and New Kung Fu Cult Master 2 <倚天屠龍記之聖火雄風> to take an online premiere approach rather than a theatrical release, surprised netizens and fans. However, this was not entirely unexpected. As the movie industry is hit by the pandemic, blockbuster films released in recent years have seen weaker-than-expected ticket sales, including Donnie Yen’s disaster film Come Back Home <搜救>, which took in only 220 million at the box office following its October premier, despite good reviews. Given costly distribution and publicity expense on top of sluggish ticket sales, Wong Jing too had given up on a theatrical release for his two films. 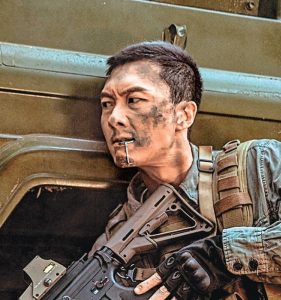 With viewers likely to leverage new member promotions on major streaming platforms during festive periods, they will be able to catch the big-budget production at a lower cost than in theaters – making the web film format a winning strategy for both filmmakers and audiences.

Former TVB actress Grace Wong (王君馨), who is also cast in the film, has expressed her enthusiasm at the wider audience reach in China, where it is set to be streamed on 3 main platforms, but left it to the organizers to share further details on whether it would be theatrically released in other regions.