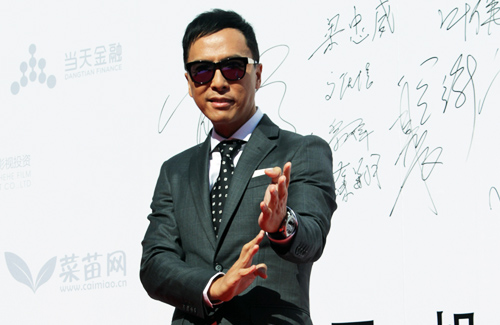 The cast and crew of Ip Man 3 <葉問3>, the final installment in the Ip Man film series, recently held a press conference in Shanghai. Donnie Yen (甄子丹) announced that Ip Man 3 may be the last action movie of his career.

Ip Man 3 will mainly focus on Ip Man’s later years and his friendship with his famous disciple, martial artist Bruce Lee (李小龍). After much consideration, the film crew ultimately decided to use computer-generated effects in order to recreate a true-to-life Bruce Lee.

“We looked at a lot of people and researched many possibilities,” said producer Raymond Wong (黃百鳴). “But we still felt that there would be a problem no matter who acted him out, unless it was Bruce Lee himself.”

Lee’s younger brother, musician Robert Lee (李振輝), was also present at the press conference. He defended the crew’s decision, saying that they looked at many special effects companies in the United States, Germany, and other places, before settling on one that would guarantee the best results.

Apart from the Bruce Lee storyline, another highlight of Ip Man 3 will be the appearance of heavyweight boxing world champion Mike Tyson, who will portray an American boss that manipulates the boxing black market and challenges Ip Man’s authority. Though Tyson himself could not make it to the press conference, he did record a video in which he declares war against Donnie.

In response, Donnie jokingly asked the crew to purchase a larger insurance package for him. However, he also added that Mike Tyson was one of his idols, making Ip Man 3 a particularly meaningful film for him.

“I followed his competitions more than ten years ago,” shared Donnie. “I studied his boxing and used those techniques in my films.”

On the day of the press conference, Donnie appeared visibly thinner. He explained this was by request of director Wilson Yip (葉偉信), who “felt that in this installment, Ip Man should look more meager.” He also shared that in order to prepare for the role, he put a lot of effort into studying Ip Man’s psychological state in his later years.

Donnie also shared that when he traveled to different countries, many fans simply called him “Ip Man” when they saw him, which he found extremely moving. “I became popular because of Ip Man,” he said. “So if I’m to leave, I hope it can be with Ip Man as well.”