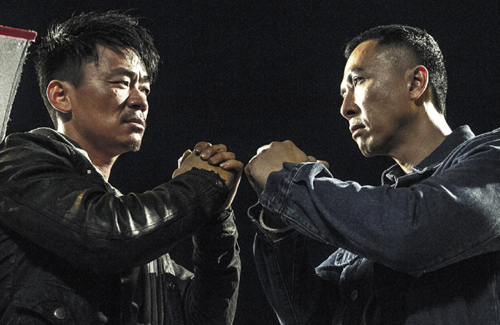 EEG’s upcoming film Kung Fu Jungle <一個人的武林>, previously titled The Last of the Best, held its red carpet premiere at in Hong Kong on October 27. Directed by Teddy Chan (陳德森), the film stars Donnie Yen (甄子丹) as a martial arts instructor who is imprisoned after accidentally killing a man. He is later released from jail to help the Hong Kong Police track down a psychotic killer, portrayed by Wang Baoqiang (王寶強). The film opens in Hong Kong on October 30.

Earlier, Donnie and his wife Ceci Wang (汪詩詩) attended a horseracing event to support his brother-in-law, whose horse was competing in the race. Donnie said the event was like a family gathering to him. Donnie just completed the filming of Crouching Tiger, Hidden Dragon 2: The Green Legend <臥虎藏龍II: 青冥寶劍 > and already has other projects lined up.

“I just took a tour around the world. I had to film in New Zealand, attend a premiere in London, and then fly to Vancouver and Hainan. I have very little time with my family and I want to spend it as much as possible with them whenever I’m in Hong Kong. I’ve been taking my daughter to school and learning about her development from the teacher.”

Earlier, it was reported that Donnie will be starring in the Hollywood film Noodle Man, directed by Michael Shamberg. Donnie clarified, “Negotiations are almost done. There are still some small details left for discussion.” The action star said he probably will not be able to join the film until after Ip Man 3 <葉問3>, which begins shooting in March 2015.

In Kung Fu Jungle, Charlie Yeung (楊采妮) portrays a police captain who is in charge of recruiting the help of Donnie’s character in the storyline. Charlie said Donnie has high standards for himself and others, pointing out that while filming had been stressful, it was also enjoyable.

Portraying a hotheaded investigator, Charlie said her character is very different from her previous roles. Charlie said she will not watch it until she returns to Singapore with her husband. “I hope he can see my fierce side in the film.”

Michelle Bai (白冰), who portrays Donnie’s love interest in the film, revealed that she suffered a bone fracture after shooting a fight scene with Wang Baoqiang. Michelle thanked the director for rearranging her film schedule so she can film her action scenes last.

Louis Fan (樊少皇), who is filming a drama in Hengdian World Studios, returned to Hong Kong to specifically attend the red carpet premiere. He was asked about his romance with JJ Jia (賈曉晨), but Louis declined all questions, insisting the press to ask about the film instead.