Frankie Lam Produces and Stars in “Let Us Stop the War!” 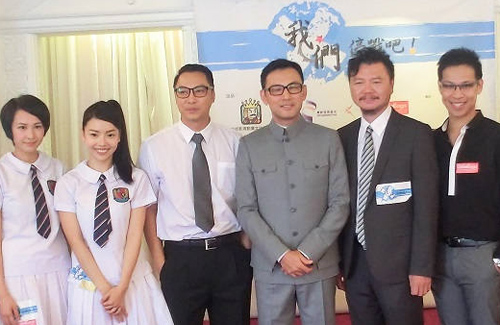 The screenplay is written by Rachel Lam (林熹瞳), a graduate at the Hong Kong Academy for Performing Arts, who has starred in a few dramas by RTHK, ATV, and HKTV. It was Rachel who approached Frankie about working on a new movie together. After reading her script, Frankie immediately agreed to invest in the project.

“I would never think someone as young as Rachel could write such a deep script,” said Frankie. “I was also young before, so I really want to use the little ability I have to help other young people. It’s also very rare to see my wife Kenix Kwok (郭可盈) agreeing to the project right away. We are aiming for a late end of year release.”

Let Us Stop the War! tells a love story between a teacher (Patrick Tam) and his student (Kathy Yuen), who also gets pregnant. Patrick and Kathy will not be sharing any intimate or kissing scenes. Pinky will be portraying Kathy’s mother.

In related news, Wong Mei Kei was recently reported to have spent the night over at Ray Chung (鍾健威)’s home. Mei Kei clarified that Ray was just being a gentleman and taking her home late at night. She said she is not dating Ray, insisting that they are only friends and have just gotten to know each other.  She said her parents do not like the idea of cohabiting. Out of respect for her parents, she will not live with her boyfriend before marriage.

29 comments to Frankie Lam Produces and Stars in “Let Us Stop the War!”