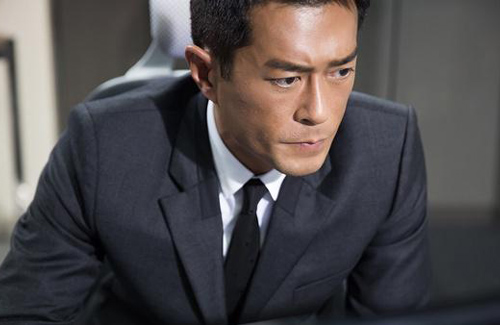 Dominating Hong Kong films in recent years, Louis has portrayed numerous character types and likens filming movies to a “dream factory, where the actor will evolve into something the audience likes to see”. Although Louis’ character in Don’t Go Breaking My Heart was flawed and dated many women, his role was more popular than Daniel Wu‘s (吳彥祖) perfect man, who was more loyal in love. Louis is unable to explain why, except that women sometimes knowingly gravitate towards the wrong men even though they may be hurt in love.

The sequel continues the love triangle between Louis, Daniel Wu (吳彥祖) and Gao Yuanyuan (高圓圓), where she becomes indecisive at the marriage altar as to which man she should choose. With the addition of Miriam Yeung (楊千嬅) and Vic Zhou (周渝民), the storyline in the sequel receives a fresh angle and different focus.

Louis explained, “The characters are the same, but there are a lot of additional scenes. In the first movie, I was the handsome playboy, but this changes a lot in this sequel. He goes through a transformation – including the challenges of trying to find himself and difficulties in figuring out what love is.”

Louis’ character is a composite of the many flaws men exhibit in relationships.  He sympathizes with his character, “I don’t think he is flirtatious because he tries his best to overcome his playboy habits. I think he has an unfortunate illness; when he sees women with large chests and suffers a nosebleed, it’s not something he wants. It doesn’t mean he is interested in the woman.” He added, “The important point is that he is willing to change and overcome his problem to find his true love.”

Louis believes that in real life, people will change for love as well. “Since it requires two people to get along with each other, if you truly love the other person, you will see the flaw as a positive trait.”

As to whether Gao Yuanyuan’s character finally chooses Louis over Daniel Wu in the sequel, Louis said, “I don’t know. The ending is top secret.”

4 comments to Louis Koo Believes Love Can Change a Person