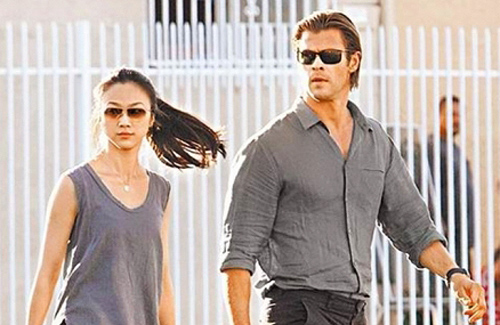 In the film, Leehom and Tang Wei will play a brother-sister duo who will team up with Thor star Chris Hemsworth to tackle cyber theft and attacks.

Chris Hemsworth, Tang Wei, and Leehom Wang were spotted filming long-night shoots in the heart of Yau Ma Tei, Hong Kong earlier. For the convenience of filming, many street food stalls and restaurants around the area had to temporarily stop business. Danny Lee (李修賢) was also present at last night’s shoot, but 60-year-old actor clarified that he does not star in the film and his reasons for being there was to look over his restaurant. “I’m a restaurateur now. I’m not an actor anymore!” he joked.

Over a hundred reporters were present at the scene, catching a glimpse of Tang Wei and Chris Hemworth running up and down the streets while carrying a briefcase. Despite the heat, the onscreen pair was in good spirits and Tang Wei even waved at the reporters.

Surrounded by eager fans, Leehom also took a few minutes off from work to take a group photo. He said, “I’m very happy to have fans staying with me in my late night shoots in the streets of Hong Kong! We must document this moment!  Sorry for the trouble, everyone!”