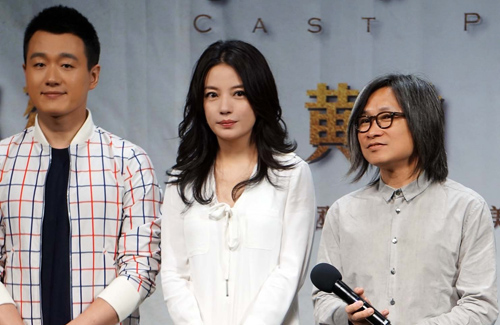 Dear Child, which is expected to begin filming on April 4, is the story of a group of parents who have lost their children at different stages of life. Among these parents is a farmer mother, played by Vicki in her first acting role since she finished her directorial debut, So Young <致我們終將逝去的青春>, which began filming in 2012 and opened in theaters last year.

“Director Peter Chan gave me a very difficult role to play,” said Vicki, who has never portrayed a farmer type of character in her previous projects. “It already made me very worried and anxious, although I am calm now. This is an enormous challenge.”

The male leads of Dear Child are Huang Bo and Tong Dawei, both of whom are fathers and thus connected strongly to the screenplay. Huang Bo, who has a two-year-old daughter, shared that his first feeling after reading the script was one of fear: “You will think, what would happen if this story really happened to you? You can’t even imagine it.”

Dawei said that he hopes Dear Child will lead viewers to call for legislation that will allow newborn children to have their DNA and fingerprints placed on file. “This way, they will be authenticated when they start school, and lost children can be found,” he explained.

Exact details about Dear Child are still under wraps, and even the actors themselves do not know who will be partnering with whom. However, Peter directly stated that the film would not have a happy ending.

“You will still be able to find an exit for your feelings, though,” he went on. “[The movie] will let us feel that no matter how much pressure there may be in life, no matter how impermanent life may be, no matter how unfair heaven may be to you, there is still love on this earth. This way, we will have the hope to continue living on.”