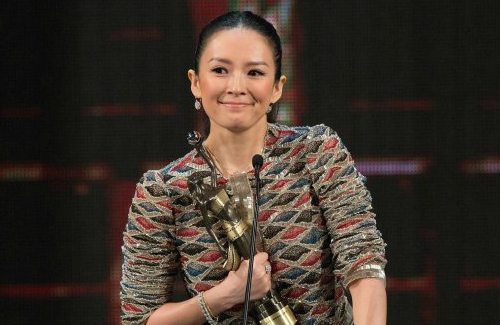 As the awards presenter for Best Actress, Nick praised all the nominees including Zhang Ziyi, Tang Wei (湯唯), and Paw Hee Ching (鮑起靜), before announcing the year’s grand winner. Regarding Zhang Ziyi, he remarked, “Everyone calls her ‘International Zhang’. I noticed she has already reached international levels when I watched her outstanding performance in The Grandmaster for the first time. She has a very high chance of receiving the award.”

Adding to the exciting atmosphere, Nick spilled one of The Grandmaster’s classic quotes to reveal Zhang Ziyi as the winner. In all smiles, Zhang Ziyi took turns hugging her costars including Tony Leung Chiu Wai (梁朝偉), Chang Chen (張震), Max Zhang, Ada Choi (蔡少芬), and director Wong Ka Wai, before heading onstage to claim her award. In midst of taking deep breaths, she uttered her speech of gratitude towards the cast and crew of The Grandmaster.

Zhang Zi Yi expressed in tears, “In the summer of 2009, I received a call and found out Director Wong wants me in a film. I jumped around happily as I informed my family members. Over the next three years, I experienced many things and shed many tears. I know that sometimes it’s okay to fall, as long as you believe you’re still walking down the same road. I am very excited today, not because of how much turmoil I have been through, but because of my gratitude to all of you who have been on this road with me.”

Best Film From Mainland and Taiwan: So Young <致我們終將逝去的青春>