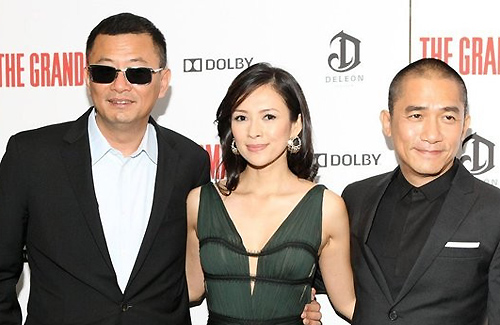 Acclaimed martial arts film The Grandmaster <一代宗師> held its New York City premiere on August 13. The film’s stars Tony Leung (梁朝偉) and Zhang Ziyi (章子怡) attended the event along with director Wong Kar Wai (王家衛). The film’s success at various international film festivals this year generated buzz ahead of its American release, attracting the attention of many Hollywood veterans, including Susan Sarandon and Samuel L. Jackson. Susan and Samuel have nothing but praise for the film and spent much time socializing with its stars. Susan even traded phone numbers with Tony at the after party, asking him to stay in touch.

To further ignite interest in the American market, famed director Martin Scorsese announced his support and granted American distributor The Weinstein Company the use of his name. The film will officially be released in the United States as “Martin Scorsese Presents ‘The Grandmaster'”. Speaking about this endorsement, Wong Kar Wai said, “Marty has always been a great inspiration. We are so thankful for his support of the film.”

Tony and Ziyi mingled with guests at the event. The two spent time chatting with Susan Sarandon and Samuel L. Jackson. Samuel shared that he is a fan of Wong Kar Wai and had put aside time so he can attend the premiere. Susan had a great time talking with Tony, and invited him to chat more over a drink. At the after party, Susan praised Tony’s talents, saying that the effort the cast has put into the film is apparent. She later traded contact information with Tony, wanting to stay in touch.

New York is only the first stop among many as the team prepares for the film’s American release on August 23. Wong Kar Wai, Tony, and Ziyi will continue to make appearances to support their acclaimed epic, with advanced screenings planned in Toronto, Chicago, Los Angeles, and San Francisco.