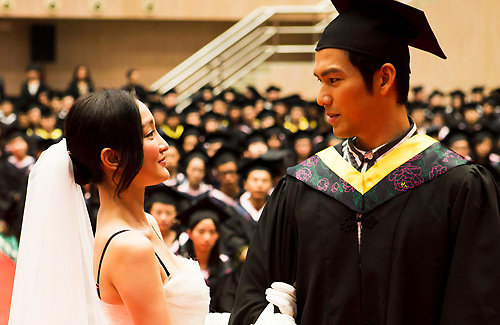 In My Girlfriend is Sick, whose title literally translates to “My Girlfriend with Premature Menopause,” Zhou Xun portrays a university student who plans to propose to her boyfriend (Wallace Chung) at their graduation ceremony. Dressed in a white, low-cut wedding dress, she is prepared to sweep her boyfriend off his feet – but the romantic scene turns into an unexpected nightmare when he cruelly rejects her proposal. As a result, she falls into an emotional rut – a sort of premature menopause.

Helmed by Korean director Kwak Jae Yong, My Girlfriend is Sick follows the themes of his previous films, My Sassy Girl and My Girlfriend is a Cyborg, which were filmed in Korea and Japan respectively. All three movies tell the story of how a boy meets a girl who catches his eye but is unique in some way, even bordering on strange.

The first time he laid eyes on her, Director Kwak was certain that Zhou Xun should play the female lead in My Girlfriend is Sick: “She combines sexiness, freshness, and craziness together. I can’t think of a Chinese actress who is more suitable than Zhou Xun.”

Zhou Xun shared that she accepted the part because the screenplay was simply too funny. Moreover, she wanted to try something more light-hearted after filming so many serious projects in recent years. “In the past, I played too many deep and stifling roles,” she explained. “It’s time to loosen up a little.”