Getting married in 2014, Chinese actress Zhou Xun (周迅) and Taiwanese-American actor Archie Kao (高聖遠) were often separated long-distance due to their careers. Since Archie grew up in the United States, the pair faced cultural barriers that further plagued their relationship. Just two years into their marriage, whispers of a rift started brewing and Zhou Xun and Archie allegedly started living separately.  When photos of Archie kissing a woman surfaced yesterday, Zhou Xun and Archie finally confirmed their divorce.

Their relationship was first publicized in March 2014 when Zhou Xun posted a photo of herself and Archie on social media announcing their relationship. The same year in July, they attended the Hangzhou One Night charity event and had a flash marriage on stage. Though they appeared to be very sweet together, this honeymoon phase only lasted two years. Afterwards, they were rarely seen together and rumors of a divorce swirled, but Zhou Xun continued to deny the rumors in February 2017.

The speculations reignited in July 2018, when they had reportedly signed divorce papers. Earlier this year, Archie had cleared all photos of Zhou Xun on his Instagram this year. 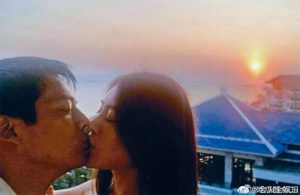 Archie has clearly moved on. A photo of the actor kissing a 30-year-old long-haired woman was leaked online yesterday. It turns out that the photo was posted by the woman herself and she had openly tagged Archie’s account. A Singaporean native, she currently lives in Taiwan and has mutual friends with Godfrey Gao’s (高以翔 ) girlfriend Bella Su. Sharing a love letter apparently written by Archie, it said, “My dear, I wish you safe travels. I hope you seize each day, and I will be passionately waiting for you. The world may have over a million roses but you are my only one, unique rose. I love you.”

The aftershock of the message was quickly met by Archie and Zhou Xun’s posts on Weibo, “Wishing you all the best.” As their posts were made within three minutes of each other, it appears to be a coordinated action and mutual agreement to disclose their divorce.

Archie Opens Up on Divorce

In an interview with the Taiwanese media yesterday, Archie confirmed that he and Zhou Xun had already divorced two years ago. He thought that everyone knew because they have not been pictured together in two years. He was surprised by the media attention yesterday, and stated that his message on social media was just to share hope for a new beginning in the upcoming year.

Stating that he is currently single, Archie said the long-haired woman is actually an ex-girlfriend whom he had broken up with two months ago. He did not expect her to suddenly share their personal photos.

Archie and Zhou Xun originally planned to officially announce their divorce around Lunar New Year. Archie emphasized that they are financially independent, and their split was not caused by financial issues. As both he and Zhou Xun are very busy with work, they will not respond further about their personal issues.

Zhou Xun on Her Marriage with Archie Kao