With her drama Imperfect Love (不完美的她) airing recently, photos of what seemed like nude paintings of a young Zhou Xun (周迅) was recently leaked on the Internet. The actress had posed for a nude painting when she was only 18 years old.

Many netizens recall Zhou Xun’s career as a young model prior to becoming actress. Entering the Zhejiang Vocational Academy of Art at the age of 15, Zhou Xun worked part-time as a calendar and magazine model. Then at the age of 18, Zhou Xun posed as a nude model for paintings that sold for millions of dollars. One of the paintings was originally sold for $2 million HKD several years ago, while another one was sold for $870,000 HKD. The set of paintings are now reportedly worth over $10 million in total.

The artist of the paintings, Pan Honghai (潘鴻海), revealed that he chose a young Zhou Xun as a model due to her pure and elegant aura. Praising Zhou Xun’s playful nature with the props in order to get the best effects for the painting, Pan Honghai knew that Zhou Xun would eventually become an international star one day. 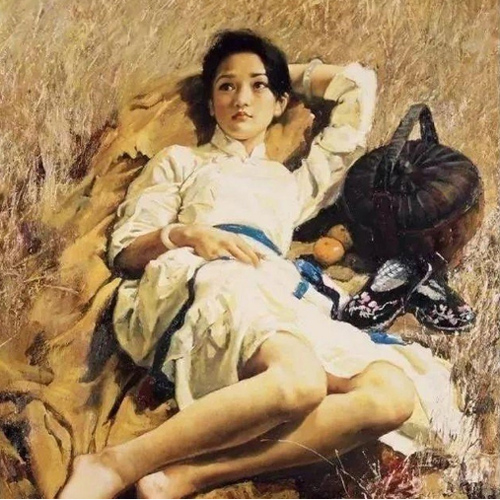 Zhou Xun, along with Xu Jinglei (徐靜蕾), Vicki Zhao (趙薇), and Zhang Ziyi (章子怡), were previously known as the Four Fadan’s of China. With over 10 best actress accolades, including winning awards at Golden Rooster, Golden Horse, and Hong Kong Film Awards, Zhou Xun is one of the top actresses in China.

However, despite Zhou Xun’s fame, her web drama Imperfect Love, which also stars Kara Hui (惠英紅) and Angie Chiu (趙雅芝), only achieved mediocre ratings. The finale aired last week, but the episode only garnered 681 million views in contrast to the finale for her previous series, Ruyi’s Royal Love in the Palace <如懿傳> which had over 1.4 billion views.