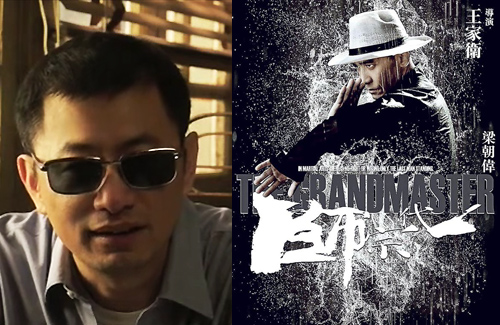 Nearly 3 years of film production and more than a decade of preparation, Wong Kar Wai’s (王家衛) dream project, The Grandmaster <一代宗師> is scheduled to release in mid January 2013. Set against the turbulent backdrop of 1930s China, the film is inspired by the life and times of legendary martial artist, Ip Man (葉問), who later mentored Bruce Lee (李小龍). Wong Kar Wai and the cast members have put their hearts and souls into this film project to tell the inspiring story.

As a big fan of Bruce Lee, Wong Kar Wai started watching his movies since he was a young boy. Wong developed an intense passion for kung fu despite never taking any lessons; he had a deep curiosity about it and wanted to learn more. In 1996, during the filming Happy Together <春光乍洩> in Argentina, Wong came across a magazine with the cover of his idol, Bruce Lee, which again sparked his deep fascination. Wong wondered who Bruce Lee really was and what made him so influential even 20 years after his death. Knowing that countless movies about this legend have already been done, Wong wanted to tell a different kind of story. He decided to shift the focus of the story to Bruce Lee’s master, Ip Man. Wong wanted to explore the life of the master who had turned Bruce Lee into a legendary figure.

As soon as Wong returned Hong Kong, he researched the life of Ip Man. Wong came across an old film clip of Ip Man, which was filmed three days before his death. Ip Man had requested his two sons, Ip Chun (葉準), and Ip Ching (葉學正) to film him performing the Wing Chun system with the wooden dummy to pass on to his disciples.  Suddenly, Ip Man stopped in the middle of his tracks in the video clip. Wong later found out that Ip Man was suffering from cancer at the time. He was frail and his feet were too unsteady to complete the moves. His two sons had to stop filming because they did not want Ip Man ‘s disciples to learn the incorrect form of Wing Chun.

After extensive research, Wong understood the true spirit of a grandmaster. With his strong love and passion of martial arts, Ip Man had dedicated his life to teaching and making sure that the traditional style of Wing Chun will pass on to generation after generation. Wong was inspired to to make a film based on the life of Ip Man.

Wong’s journey to make The Grandmaster took more than one decade, as he wanted to fully understand the spirit and philosophy of kung fu. Under the guidance of Wu Bin (吴彬), Jet Li’s (李連杰) master, Wong traveled to many locations in China for over 3 years including Beijing, Tianjin, Xian, Xingxi, and Foshan to interview different grandmasters who specialize in different forms of kung fu such as Wing Chun, Baguazhang, Bajiquan, and Xingyiquan.

From his journey, Wong wanted to incorporate these heart-warming stories about their dedication to kung fu into his film.  He did not want it to be a typical martial arts movie that relies on special effects to enhance the styles. In addition, Wong wanted his actors to not depend on looks and action poses to be convincing as grandmasters.  He required his stars to take on at least a year of training with a grandmaster in order to understand their characters better.

Wong chose Tony Leung (梁朝偉) to portray Ip Man. Although Tony is known for his excellent acting skills, he lacked a martial arts background. Therefore, Tony spent 3 years of intensive training with Ip Man’s last disciple, Leung Siu Hung. After a long period of tough training, Tony managed to gain  solid martial arts foundation and he developed power in his strikes as he was able to break a wooden board that was several inches thick. Most importantly, Tony was able to absorb the spirit of a grandmaster that helped him in his portrayal of the legendary Ip Man.