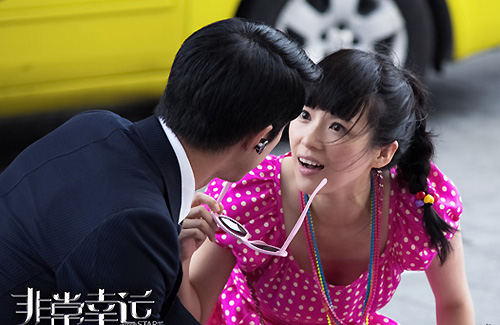 Stuck between the summer holiday months and the national holiday month of October, September is usually a time with exceptionally poor box office numbers. Zhang Ziyi’s (章子怡) latest film My Lucky Star <非常幸运> however, took the risk to open in Chinese cinemas on September  17, and to the surprise of film critics, her film successfully took in over 10 million RMB  on its opening day. By the end of the week, My Lucky Star took in over 80 million RMB in box office sales.

The romantic comedy film, directed by Dennie Gordon and produced by Ziyi, is a prequel to the 2009 film, Sophie’s Revenge <非常完美>. Ziyi reprises her role as the geeky cartoonist Sophie, who finds herself involved in an international heist mission after meeting handsome special agent, David (Leehom Wang 王力宏).

My Lucky Star has also garnered positive reviews from viewers, praising its genuine humor and high production values. My Lucky Star was filmed in Hong Kong, Macau, and Singapore.

To thank the moviegoers for their support of the film, Polybona Films released an exclusive clip of a scene from the film, which features Sophie awkwardly dancing to David’s drumming while wearing a nurse outfit.

My Luck Star opened in North America in metropolitan areas such as New York, Los Angeles, San Francisco, and Toronto on September 20 and will play for a limited time.