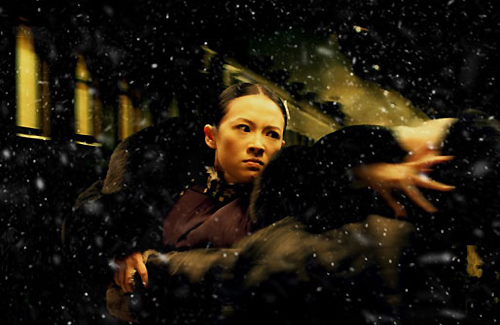 Portraying Ip Man in The Grandmaster <一代宗師>Tony Leung (梁朝偉) jokingly moaned, “I have been training under a Wing Chun master for the past 3 years, yet the scenes I have can’t beat Zhang Ziyi (章子怡).”

Although Wong Kar Wai had set out to make a biopic about Ip Man, The Grandmaster grew into a sprawling account of Chinese martial arts. In the opening scene, Tony fought off 10 of his adversaries in a rain scene, showcasing Wong Kar Wai’s signature martial arts aesthetics. In another scene, Tony and Zhang Ziyi were dueling at the Golden House; the awe-inspiring exchange proved the hard work both actors had put in throughout their training.

In The Grandmaster, Tony hardly has many spoken lines, which prompted wife, Carina Lau (劉嘉玲) to nickname him as “The Silent Ghost” after watching his performance. Director Wong Kar Wai (王家衛) explained, “Initially I gave Tony many lines, but I deleted them in the end because Ip Man is a man of few words. Without saying a word, he is able to command the room.”

On the contrary, Zhang Ziyi had some of the best lines in the film. At the same time, her internal struggle between her admiration for Tony’s Ip Man and her impulse for exacting revenge for her father proved to be a well-received performance.

Under Wong Kar Wai’s heavy-handed editing, Chang Chen (張震), Song Hye Kyo, and Chilam Cheung (張智霖) had little screen time in The Grandmaster, despite extended filming. Taiwanese actor, Chang Chen, trained for 3 years under a Baji master for his role; however, he ended up appearing in only 3 scenes in the show. Chang said, “I know Wong Kar Wai’s style, so I have expected this.” Song Hye Kyo, who has been noticeably absent from the film’s promotional events, plays Ip Man’s wife has one line in the entire show, “Is it that cold in Foshan?” while Chilam Cheung only makes a multi-second appearance.

The Grandmaster marked Tony’s seventh collaboration with Wong Kar Wai. Since 1990, Tony had appeared in Wong Kar Wai’s movies such as Days of Being Wild <阿飛正傳>, Ashes of Time <東邪西毒>, In the Mood for Love <花樣年華> and 2046. Will there be an eighth time? Tony declined to comment, likely due to the laborious filming conditions of The Grandmaster and physical exertion for his role.

The Grandmaster was the top film in mainland Chinese box offices, earning 162 million RMB in its opening weekend.