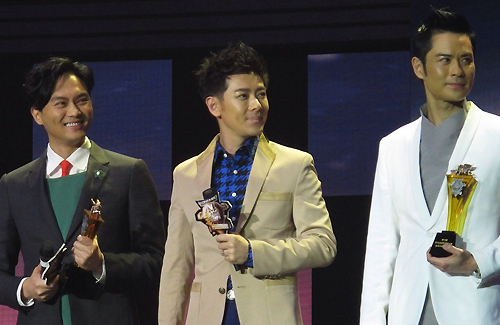 The 18th China Music Awards took place at the Venetian Macao on April 23. The award ceremony, which honors the year’s top music artistes, gave out trophies for 37 categories that included achievements in music production, stage, and dance.

To celebrate its eighteenth year, event organizers invited Jimmy Lin (林志穎), Kevin Cheng (鄭嘉穎), and Chilam Cheung (張智霖) to accept their awards together on stage. Photos of their 18-year-old selves were on display, and many were amazed at their unchanged, youthful appearances.

Kevin, who is this year’s Media Recommended Artiste, was happy to receive the award and humbly joked that he would not have achieved the same honor in Hong Kong. Although he was praised for maintaining the same look over the years, Kevin actually sees drastic changes in himself and thinks of Jimmy as the true expert of defying age. Jimmy, who accepted the award for the year’s Most Popular Artiste, had apparently taught Kevin some of his own skin care secrets. “He said I must eat healthier, and asked if I have drank collagen. I said no, and he said ‘you must drink it! It has a different skin care effect than normal foods.'”

Equally well-kept Chilam Cheung took home the Best Film and Television Person of The Year award and was named the year’s Care Ambassador. He was asked to address his decision to withdraw from an upcoming free beach concert in Macau, which some say is staged by the government in order to distract attention away from a pro-democracy protest planned for the same day. Chilam cites the sensitive political nature of the event as a reason for his withdrawal, though made no comment on his stance.