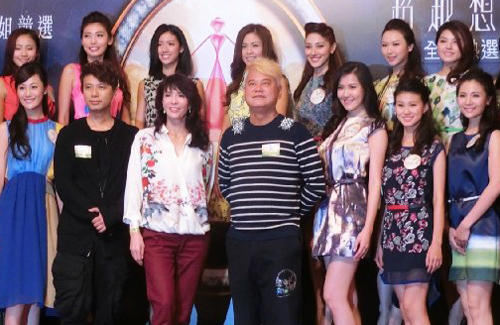 The 2013 Miss Hong Kong contestants are trying their best to impress celebrity judges before the pageant’s semi-finals on August 25. For this year’s pageant, five candidates will be selected by celebrity judges to move onto the finals, while the other five spots will be filled according to viewers’ votes.

To give the twenty contestants a final chance to please the public, TVB held a press conference at a Tsim Sha Tsui hotel on August 19. Celebrity judges Carol Cheng (鄭裕玲), Nat Chan (陳百祥), and Hacken Lee (李克勤) were present to meet the Miss Hong Kong hopefuls. Eric Tsang (曾志偉), who recently flew to Thailand to mourn the death of Master Chou Kim Nam (White Dragon King 白龍王), was unfortunately not at the event due to a delayed flight.

Popular contestants, #17 Grace Chan (陳凱琳) and #18 Cherry Cheung (張雪瑩), spoke to reporters to clear up some of their recent rumors. Grace corrected an earlier report claiming she was living with her foster father. She stated, “I am living with my birth parents. Perhaps some people saw Mr. Chan earlier and didn’t think we looked like father and daughter.”

Cherry initially remained vague when asked about gossips saying that she once appeared on a mainland matchmaking television program and flirted with the audience. Later she admitted to singing on a mainland TV program, but did not give further details about the name or the type of the show. Cherry also insisted that she was not being flirtatious with the audience.

Celebrity judge Hacken Lee praised the contestants and the format of this year’s show. Earlier, Eric Tsang criticized the quality of this year’s candidates, implying that they are below-average. When asked to comment on Eric’s opinion, Hacken said, “Eric said that on purpose. I see that the contestants are gradually making improvements. This year’s Miss Hong Kong pageant is similar to a reality show. The contestants were free to decide on what they want to do or say during location shoots.”

Later, Hacken took the opportunity to plead with reporters about their stalking behavior. He was taking his two sons to school this morning when the three were surrounded by reporters and blinding camera flashes. Recalling this incident, Hacken clasped his hands as a gesture of respect and said, “My reporter friends, I sincerely ask that you please take photos at a distance. There were many reporters at the school’s entrance, and they all had very bright flashes. I am not complaining. I just don’t want to bother other students and their parents. I am the public figure; please don’t trouble my family.” When asked if his sons were frightened by the incident, Hacken sighed helplessly. “I truly understand that you are just doing your job. If this becomes more severe, I will kneel down and beg all of you. It is best to pixelate the photos; the school is only a place for learning after all.”