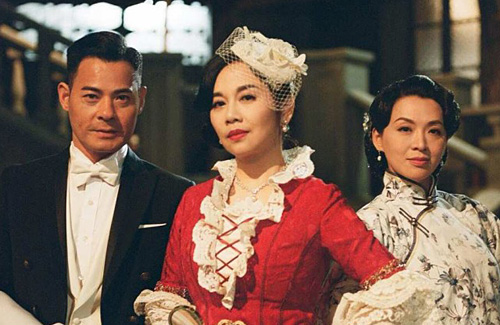 Upcoming TVB drama, The Ghetto-Fabulous Lady <危城 First Lady>, is a detective comedy series set in the Republican era. Adia Chan (陳松伶), Ben Wong (黃智賢), and Alice Chan (陳煒) will be starring as main leads. Although Ben and Adia had worked together in the past, this will be Adia and Alice’s first time collaborating.

Adia and Alice will portray bickering sisters in the drama. Adia shared, “I portray Alice’s older sister. I am more westernized, so my outfits mainly consist of western dresses and clothes. Alice, on the other hand, is a more traditional Chinese woman. Having a family relationship storyline is much better than having a romantic storyline!”

Because of the hot weather and having to wear layered outfits from the Early Republican era, Adia’s sensitive skin suffered from allergic reactions. “I developed rashes. I got bit my mosquitos, and my eyes are inflamed. Now, I make sure to bring all my medication to work!” Despite all these nuances, Adia expressed that filming conditions have not been bad. Instead, she attributed these difficulties to her increased age and reduced immunity.